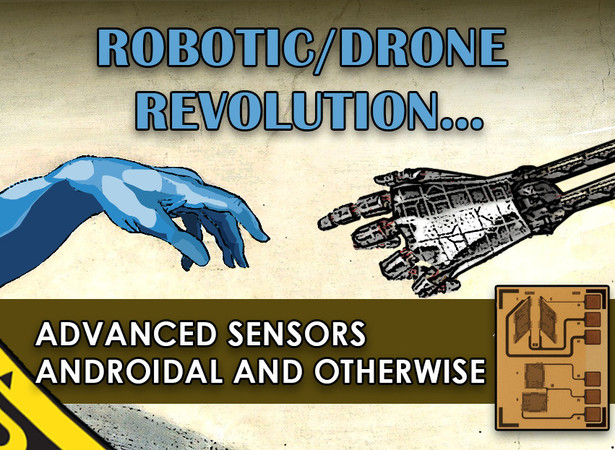 Notwithstanding the fanciful notions implanted in the public imagination by science-fiction purveyors, it will be a long time before every person and stress analyst will have their own clever little android that can perambulate about the domestic premises, cleaning the house, making beds, cooking and serving meals, mowing the lawn, bonding a strain gage, washing the car, etc.

Even under these circumstances, however, not much prescience is required to recognize that humanity and foil strain gage technology stand at the threshold of a new and unsettling era - one that can be referred to with little danger of overstatement as a “robotic revolution”.

Although ingenious mechanical automata are by no means new, the fundamental difference in today’s robots is their force /touch mechanism. Integration of advanced sensors technology strain gages with the robot yields a world of fresh potentialities which can be expected to radically change the nature of our transportation, industrial workplace and medical care.

A few of many new features contributed to the robot by advanced sensors strain gages are:

“Soft” gripping (i.e., the capability for quickly, easily reprogramming the robot for a different or modified force, without the need for mechanical changes).

Self-adaptiveness – to sense conditions in the working environment and to respond appropriately.

Precise control of all the robot actions and responses.

Just as certain as is the imminence of widespread industrial robotization, so is our likelihood of embracing the new advanced sensors technology from a state of underpreparedness – sociological, economic, culture and educational.

Fortunately, however, there are prevailing conditions which will at least temper the rate of robotic proliferation, and thus the severity of the accompanying societal dislocations. One of these is the current cost of robots. Sophisticated industrial, medical and transportation robots are still very expensive, and the rate of displacement of human labor by robots will initially be limited by the inexorable forces of manufacturing economics.

Accelerated adoption of robots based on advanced sensor technology will occur, of course, as lower prices are brought about by mass production of these devices, and the extreme will probably be reached when robots are fully manufactured by “other” robots.

The foregoing considerations only affect the timing (and, to some degree, the direction, not only of the “stress”) of the robotic and metal foil strain gage revolutions side by side. There may be androids at some point in our remote future; but, for the time being, we can expect robots to be shaped primarily by the practical requirements of the industrial workplace. For such applications, the emulation in robots of the structure, features and redundancy of the human system offers little or no advantage. As a result, the first several generations of robots will tend to look just like what they are – force/touch machines based on strain gage technology for object manipulation.

As drones begin to carry and deliver payload, there the need will arise to measure the load. With foil strain gage technology being the first choice in load measurement applications which must be stable with time and temperature, Advanced Sensors strain gages will be called on to meet the demand.