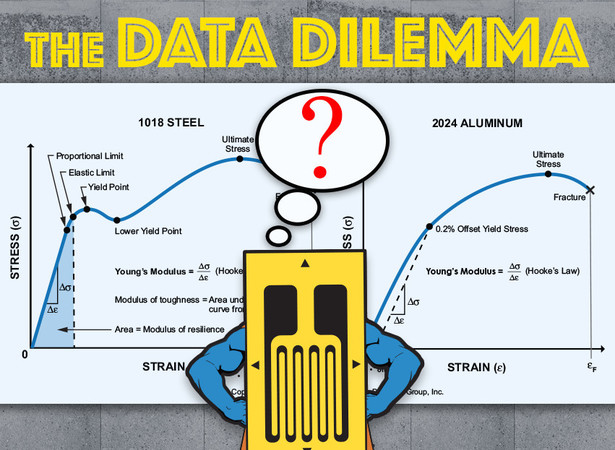 The bulk of industrial experimental stress analysis is currently performed with the resistance strain gage (often irrespective of whether this represents the most effective means of determining the stress in a particular case). Since the strain gage measures strain rather than stress, it is always necessary to infer the state of stress in the test object by invoking the appropriate set of constitutive equations, or stress/strain relationships. These, in turn, require introduction of the elastic properties of the material; minimally, E and ν for homogeneous isotropic materials.

With the foil strain gage nearing its eighty  anniversary, it might rationally be assumed that the stress analyst would have ready access to accurate and reliable data on these fundamental properties for most of the materials ordinarily used in industrial and consumer products. Such, however, is not the case. In fact, the body of published data on elastic properties is in such disorganized and chaotic state that is quite common practice among seasoned engineers to simply use educated guesses for the elastic modulus and Poisson’s ratio. In doing so for conventional structural metals, incidentally, they may not err noticeably further than they would by using some of the published data.

It is difficult enough to find reliable data on E and ν for many of the popular steel and aluminum alloys – even at room temperature. As the material becomes more exotic, or the temperature deviates significantly from room temperature, the data tend to become ever scarcer and, when found, less reliable or applicable. This situation poses a particularly severe problem for the engineer in a small company or a startup who does not have direct access to extensive knowledge database. Regrettably, the professional organizations in this field have never produced an authoritative compilation elastic properties data for use in experimental stress analysis.

The good news is that errors in the principal stresses arising from errors on the assumed elastic properties are usually modest in magnitude; especially for the conventional structural metals. In the case of the elastic modulus. The effect of an error in Poisson’s ratio is determined by a more complex relationship [ ƒ (Єp/Єq, ν)], and is generally smaller than for the same error in E. But, since the relative uncertainly in ν is to be of the same order as that for E. With these considerations, for typical steel and aluminum alloys, the uncertainty in principal stress due to uncertainties in the elastic properties should commonly fall in the range from 5 to 10%.

For other materials, however, the errors may not be so well-behaved. When working with nonlinear materials such as cast iron and magnesium, for example, the errors can be much greater, depending upon how injudiciously the elastic properties are selected. Consider, too, the plastics which are increasingly used in structural and semi-structural applications in automobiles and in countless other industrial and consumer products. The elastic properties of these materials are generally time, temperature, humidity and age dependent and there is no systematic documentation of the properties for stress analysis purposes. The situation is, if possible, still worse for reinforces plastics, even when they can be treated as isotropic. With anisotropic composites, where the constitutive equations require directional elastic properties, the stress analyst is largely “on his own” in determining the properties.

Actually, given the present state of affairs, the industrial stress analyst may often be faced with the practical necessity of either estimating or measuring the elastic properties. In many cases, of course, the strain gage itself is potentially the most suitable means of accomplishing the measurement. It is worth nothing, however, that unless such tests are very knowledgeably designed and skillfully performed, the resulting data may be less accurate than the reasoned estimate of an experienced engineer.