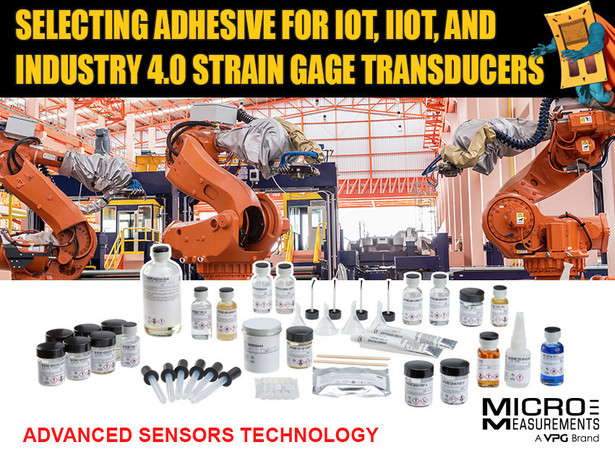 No single manufacturing step in transducer production has more influence on the performance and longevity of a transducer than foil strain gage bonding. Paramount to this process is the selection of an appropriate adhesive. Improper selection or application of an adhesive will assuredly degrade transducer performance, regardless of the quality of strain gage or spring element used.

Criteria for selecting an adhesive are very similar to those for the strain gage backing, since the adhesive, in effect, is an extension of the gage backing to the spring-element surface. Ideally, the adhesive would cause the strain gage sensor to act as an integral and inseparable part of the spring element – without adding influences of its own. Such an ideal adhesive would be characterized as follows.

In actual practice, compromise is generally necessary when selecting an adhesive to meet the requirements of a particular transducer application.

Since certain characteristics are more important than others in different cases, several adhesive system have been developed to serve the spectrum of needs. Among the strain gage sensors adhesives offered by Micro-Measurements, those which find use in transducer construction ( in varying degrees) are described and compared below.

This is a single-component adhesive which transforms from a liquid to a solid when pressed into a thin film between an Advanced Sensors Technology strain gage and the mounting surface. It is particularly popular for routine strain measurement in stress analysis applications because of its fast cure and minimal clamping requirements (firm  thumb pressure for 1 to 2 minutes is normally sufficient). M-Bond 200 is sometimes used in simple do-it-yourself transducers where high accuracy is not required. The adhesive is sensitive, however, to moisture and certain solvents, and is also subject to long-term embrittlement. For those reasons, it is not recommended for application in which the transducer must remain operational for more than a few months. Creep effects are also less predictable than for the adhesive types that follow.

The epoxies form the largest class of adhesives used for Advanced Sensors Technology strain gage sensors bonding because of the wide range of characteristics available through proper formulation. Variations include filled adhesives, and two groups of unfilled adhesives classified as “100%-solids” and “solvent-thinned”. Some of the epoxies are single-component, and others are two-component adhesive systems (*).

(*) – The terms single-component and two-component, as applied to adhesives, are sometimes misunderstood. These descriptions refer only to the separate packing of the curing agent(s) and epoxy resin. Either of these two compounds may actually consist of several constituents. Single-component epoxies are formulated with the latent curing agents that require elevated temperatures to activate the curing mechanism. These adhesives have inherently long pot lives at room temperature, and thus do not require physical separation of curing agent and epoxy resin prior to use.

Epoxy adhesives containing fillers, such as powdered aluminum oxide or silica, are often used in structural applications. The presence of fillers helps control the thermal expansion/contraction of the adhesive, and thus contributes to maintaining bond integrity over a wide temperature range. In strain gage installations, fillers also tend to increase the glue-line thickness to 0.0002 in (0.05 mm) or more, generally rendering the filled epoxies unsuitable for transducer applications. Except under rather rare circumstances, transducer gages should be installed with very thin glue lines – on the order of 0.0001 to 0.0005 in (0.003 to 0.013 mm). This is done to improve strain transmission, reduce creep, and minimize reinforcement of thin spring-element members in bending. Unfilled epoxy adhesives are capable of developing extremely thin, void-free glue lines, and thus represent the best choice for transducer installations. As noted above, two distinct classes of unfilled epoxies are formulated for strain gage bonding: 100%-solids, and solvent-thinned adhesives. The term “100%-solids” means that the adhesive contains no ingredients in the form of volatile solvents which must be driven off before the adhesive cures. Micro-Measurements M-Bond AE-10 and AE-15 adhesive formulations are in this class. They both employ the same epoxy resin, but have different curing agents; Type 10 and Type 15.

M-Bond AE-10 and AE-15 differ most notably in the working time (pot life) available after the curing agent is mixed with the resin. AE-10 is the more reactive material, with a pot life of about 20 minutes, in contrast to 1 ½ hours for AE-15. Because of its greater reactivity, AE-10 will cure sufficiently in six hours at room temperature for use in low-performance transducers. The preferred curing time is at least 24 hours at room temperature. AE-15 requires a higher temperature for complete polymerization; and curing for one hour at 175°F (80° C) is recommended as a minimum. This adhesive, however, develops higher ultimate properties than does AE-10. As a result, the AE-10 formulation is seldom selected for transducers gage bonding except where the elevated-temperature cure of AE-15 is impracticable.

Typical bond-line thickness with AE-15 will normally be close to 0.001 in (0.025mm). This is somewhat thicker than ideal for high-precision transducers, principally because of creep effects. However, when used in conjunction with general-purpose polyimide gage backing (EA, CEA and ED –series), AE-15 is a popular choice for transducers in the 0.5% accuracy class, intended for operation in the temperature range from -50 to +150°F (-45 to +65°C). The main reason for this popularity is the relatively simple bonding procedure compared to that for the solvent-thinned epoxies described in the following section.

Micro-Measurements offers three specially formulated epoxy (and epoxy-phenolic) adhesives for use in high-precision transducers M-Bond 610, 600, and 43-B. These adhesives are designed for higher operating temperatures and thinner bond lines than the AE-10/15 system. They typically contain about 75% volatile solvents which must be liberated during specified air-dry periods and subsequent elevated-temperature curing cycles. The large solvent content allows the formation of extremely thin, hard and void-free bond lines, and greatly increases the pot life after mixing. The cement thicknesses under properly bonded gages are only about 0.0002 in (0.005 mm) with these adhesives. Obtaining such thin bond lines requires, however, strict adherence to recommended bonding procedures. Particularly important are the cure temperature ( along with its rise time and duration), the clamping pressure, and the post-cure. (**) Micro-Measurements Instruction Bulletin B-130 should be consulted for the detailed step-by-step bonding procedure.

For transducer applications, M-Bond 610 epoxy-phenolic adhesive provides the highest level of performance, and is therefore the most widely used of the three solvent-thinned types. M-Bond 600 is similar in character and appearance to 610 except that it has been formulated for greater reactivity and correspondingly lower-temperature cure schedules. The increased reactivity naturally results in a shorter pot life (two weeks, compared to six weeks for M-Bond 610). The different formulation also contributes to greater variation in bond-line thickness which, in turn, may have a detrimental effect on creep scatter in finished transducers. Because of this and other minor performance differences, the 610 adhesive is generally preferred over M-bond 600 for transducer applications.

M-Bond 43-B is a single-component epoxy adhesive, developed particularly for compatibility with N2A-series transducer strain gages. It is capable of thin, hard bond lines, much like M-Bond 610. Since it is a single-component adhesive, its pot life is the same as its shelf life, or about nine months at room temperature. M-Bond 43-B usually requires higher cure temperatures than either 610 or 600, and this may prevent its use on certain transducer alloys. Heat-treated aluminum alloys, for example, may have their properties altered by the relatively high–temperature curing and post-curing procedures specified for 43-B adhesive.

The majority of foil strain gages are installed using an adhesive system that is purchased separately from the strain gage itself. On some Micro-Measurements Advanced Sensors Technology gage types it is possible to order gages with a 43-B, B-staged epoxy adhesive that already applied to the gage backing. The 43-B B-staged adhesives is part of adhesives that when initially applied are dry to the touch, but can be re-liquefied and fully cured through exposure to heat and pressure.

How do you use it them? Gages ordered with B-staged adhesive are shipped in special non-contaminating flat trays. To install the gages you simply remove them from the trays, place them at the desired bonding location, and hold them temporarily with a small piece of MJG-2 tape. Then apply normal bonding pressure and oven-cure. No additional adhesive is needed.

Advantages/disadvantages: The biggest advantage is in not having to purchase, mix, apply, and store a separate adhesive for gage bonding. The biggest disadvantages are dealing with gages that now have a shelf life (approximately six months under lab conditions) and needing to use tape to hold them during cure.

With carefully considered strain gage selection, and employing a solvent-thinned high performance epoxy adhesive, the user will have made two of the important ( and requisite) steps toward achieving a stable, accurate transducer.

Last but not least, proper gage-installation technique is also a critical factor in transducer performance.