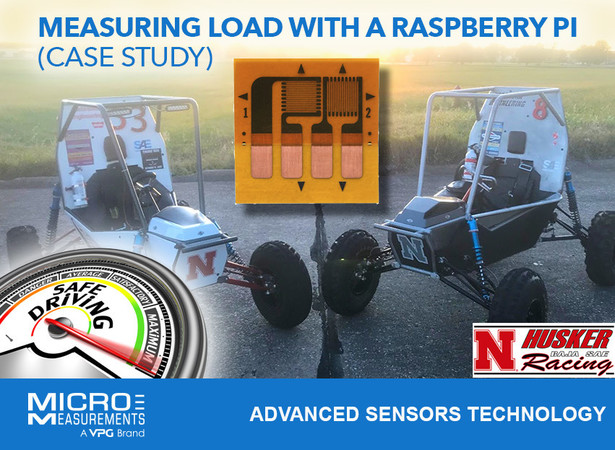 Measuring Load with a Raspberry Pi

SAE (Society of Automotive Engineers) is a global organization providing oportunities for students through the collegate design series. The goal in Baja SAE is to design a one person offroad vehical with maximum durablility and minimum cost. Teams compete in design, sales, and dynamic events including a four-hour endurance race designed to push the car to its limits. The goal of this project is to record the strain seen by suspension components during the endurance race. 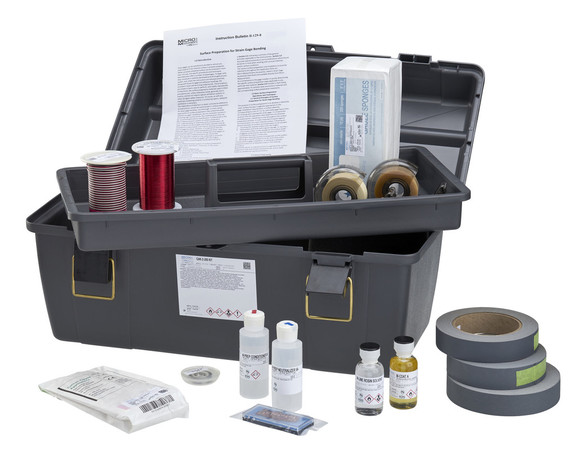 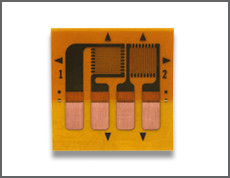 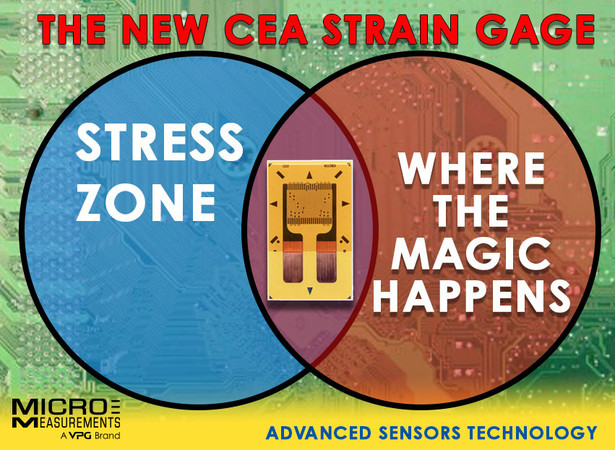 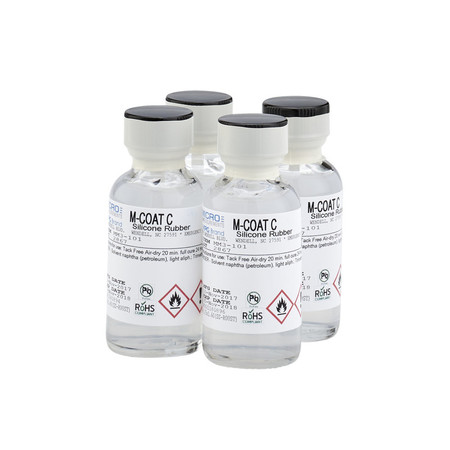 Every year, Husker Racing designs a new car based on data and observations collected from the previous year. Strain gauges allow us to dynamically test our suspension componants under our normal driving conditions. The challenge was to implement strain gauges with an onboard data acquisition system to determine the loadings seen by the suspension linkages. The collected data would allow us to investigate lighter materails to be used in our suspension componants.

To goal of this study was to prove that carbon fiber can withstand the loadings seen in the cars control links as shown in Figure 1. The control link is mounted on both ends by spherical bearings.

This means that the only load to be measured is the axial tension and compression.

The solution to aquiring accurate data under normal driving conditions was to measure strain using the tee rosette strain gauges provided by Micro-Measurements.

Tee rosette strain gauges were selected to allow for easier application of a full wheatstone bridge.

The strain gauge sensors were applied on opposite sides of the tube and wired as to eleminate bending as shown in Figure 2. This setup results in measuring only the axial load. 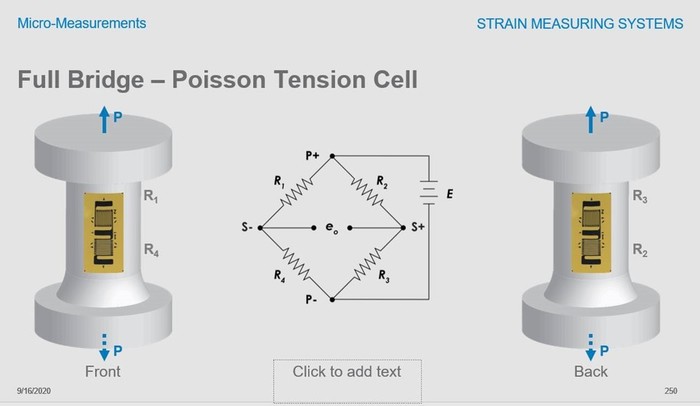 The strain gauges were connected to an HX711 board to amplify the output signal and convert the signal from analog to digital. The strain guages and connections are shown in Figure 3. 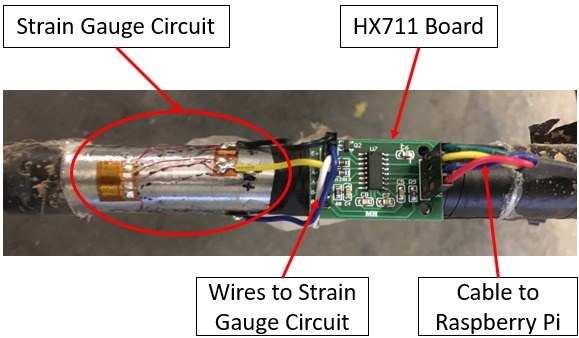 Figure 3: HX711 Board and Connections

To record the data under normal driving conditions, a Raspberry Pi was fitted to the hood of the car with a touchscreen as shown in Figure 4. This configuration allowed the system to be easily contained within the car and easily controlled by the driver. The system did not require any connections wired or wireless outside of the car. 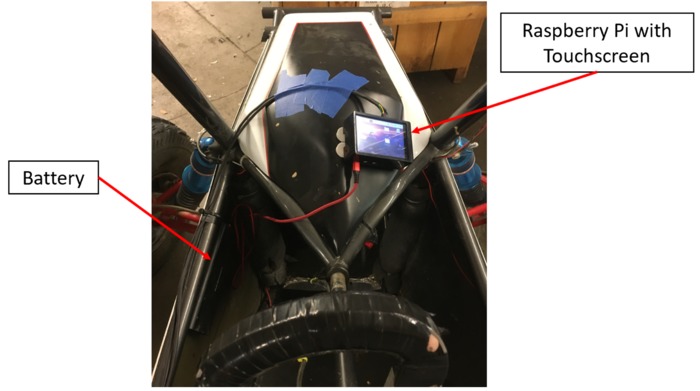 After setup and calibration, the car was driven through several test to simulate normal driving conditions. These included jumps, drifting, colliding with obstacle, and a drop test. The highest loads were seen during the drop test. For this test, the car and driver were raised from the front right corner of the roll cage until the left rear wheel was 2.5 feet off the ground. This positioned the car so the left wheel (with the strain gauges) would contact the ground first with side loading. The goal of this test was to simulate a rollover incident. 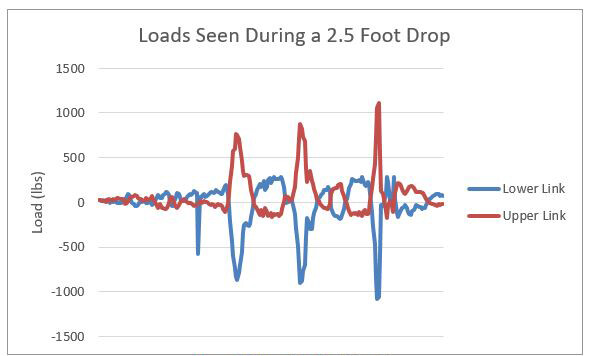 The Husker Racing carbon fiber control link design shown in Figure 6 was based off a similar design used by Husker Motorsports Formula SAE for various applications.

The goal of testing the control links was to prove that this design can withstand the conditions of the baja car.

Based on the design in Figure 6, the control link should fail at the epoxy joint between the aluminum insert and the carbon fiber tube. This joint should theoretically yield at 2,925 lbs. Based on the data collected during the drop test shown in Figure 5, the largest load in tension was 1109 lbs. This provides a factor of safety of 2.64 for the carbon control link.

This information proves that the carbon fiber control link can withstand the loadings seen by the baja car control links.

“Strain gauges allow us to advance our team forward in competition by using modern technology to study and redesign components.”

Husker Racing would like to thank Mike Wadner, Paul Millard, and Micro-Measurements for their support and guidance.

Their support has allowed us to collect valuable data for our design competition as well as gain skills and knowledge to help us compete in years to come. 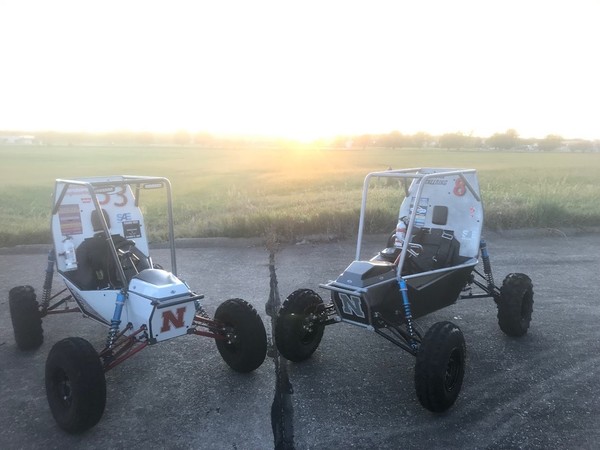