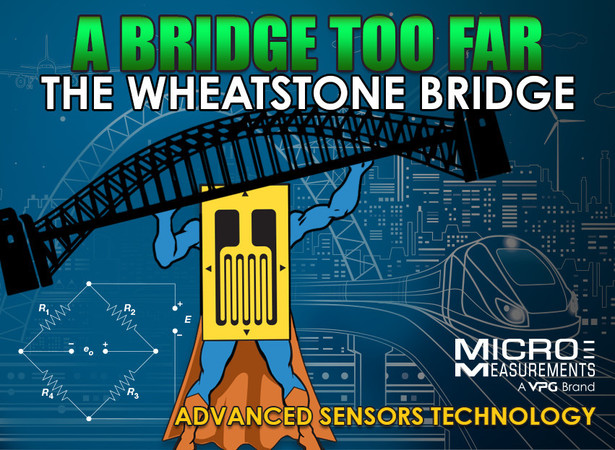 A Bridge too far? The Wheatstone Bridge

In 1833 a man called Samuel Hunter Christie invented a bridge circuit that, 10 years later, was discovered by Sir Charles Wheatstone who presented its many uses. Despite his attribution to Christie, his own name stuck. It became the standard circuit for strain gauges soon after their invention in the 1930s.

Strain gauges exhibit very small resistance changes. A direct resistance measurement with a multimeter would need to measure 350 ohms (a typical gauge resistance) to 4 decimal places. The Wheatstone bridge converts this very small resistance change into a voltage which can be accurately measured. This is an advantage because it creates a change of voltage from zero rather than a small change of a large value. It’s like being presented with a single needle rather than the entire haystack!

The image below shows the small change of resistance and the small change of voltage for a 1 microstrain change. Note that the measured value (the circle in the middle) means that a highly-sensitive volt meter can be used to easily detect the change. 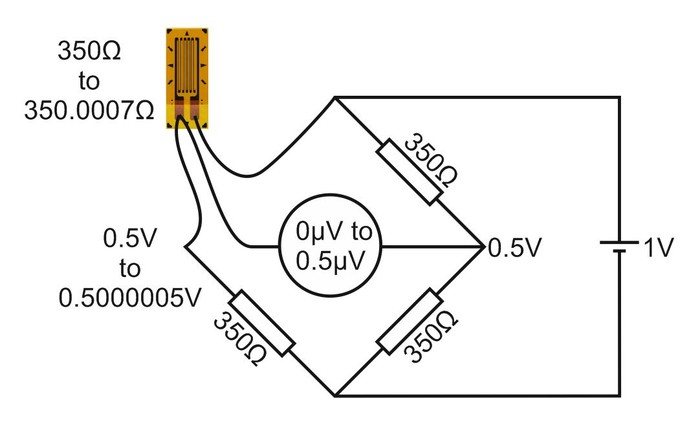 The Wheatstone bridge – a simple guide

It is common to be asked how to convert the output of a Wheatstone bridge to strain. The simplest answer is to use a dedicated instrument. These have the necessary features, sensitivity and built-in conversion to display directly in microstrain. All the user must do is program the gauge factor (sensitivity, published on the manufacturer’s datasheet) and it’s done. Additional features will enable the user to balance (zero) the display, and select the appropriate bridge configuration. More advanced instruments can remove thermal effects and automatically correct for leadwire length.

What these dedicated instruments have in common is high sensitivity. Typically they must detect sub-milliohm changes in the strain gauge; a typical 350 ohm gauge has just ~0.0007 ohms change per microstrain (µƐ). To put this in perspective, a typical metal film resistor will have 50 times this change per 1°C change of temperature. It therefore goes without saying that the resistors in a Wheatstone bridge are as, if not more, critical than the strain gauge sensor connected to it. A good-quality instrument will use Vishay foil resistors (Z1-Foil Technology)  with 1ppm/°C or better temperature stability.

The Wheatstone bridge converts the very small resistance change from the strain gauge into a very small voltage change. With a gauge factor of 2.000 this change is just 0.0000005V per volt of excitation, or 0.5µV/V/µƐ as shown in the image above. Even if 10V excitation is used (optimising the excitation voltage is a whole subject on its own) there is still only a 5µV change per microstrain!

The simplified formula, suitable for most uses, is:

K = the gauge factor of the strain gauge, found on the engineering datasheet supplied on the packaging. Often a “nominal” value of 2 is used.

V = the excitation voltage into the bridge. Often this is left as a value of 1 so that the output of the bridge is in V/V (often converted to mV/V or µV/V).

N = number of active arms. For stress analysis there is 1 active arm: one of the four resistors in the bridge is a gauge, the other three are fixed resistors. For loadcells this gets more complicated, with a maximum 4 active arms for a typical bending beam such as a binocular loadcell (a gauge in each of the 4 arms). For tension or compression measurements, for example a bolt in tension or a suspension pushrod, N is approximately 2.6, or more accurately 2 + 2 x Poison’s Ratio (around 0.3 for most metals).

As already mentioned this is a simplified equation and will apply to most measurement applications where the strain levels are relatively low. There is a secondary effect, Wheatstone bridge non-linearity, which most commonly becomes apparent when trying to calibrate an instrument where corrections must be made. This is a complex subject best answered by referring to our technical paper. Fortunately many instruments can correct for this error automatically, even taking the initial bridge out-of-balance into consideration.

The easiest, most reliable and accurate way to get the best from your strain measurements is to use a dedicated instrument designed specifically for strain gauges.

If you wish to use your own instrument you must be careful to select the best resistors and ensure you make the right corrections to convert to microstrain. Literature to help with this is freely available in the Knowledge Base on our website.