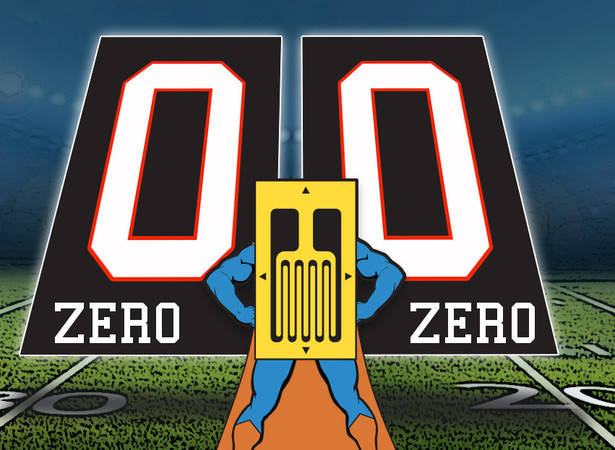 ZERO-ZERO IS A BIG SCORE for a Strain Gage

The electrical resistance foil strain gage is a remarkably stable measurement device when properly installed and used.  With the aid of a suitable protective coating, the bonded gage’s resistance should remain unchanged until a load is applied to the test specimen. Likewise, the subsequent removal of a load should normally result in a return of the strain gage to its original “no-load” resistance.  Any measurable change in the installed resistance – before or after loading – warrants an investigation into the cause.

The resistance of a bonded gage is rarely measured precisely. More generally, the gage is connected to some form of strain gage instrumentation which is zero-balanced to “match” the installed resistance of the gage. Any subsequent change from this no-load “zero” reference point is either a reversible zero-shift, or a permanent zero-drift, in resistance.

Changes may derive from any of four potential sources:

The act of load application and removal will seldom result directly in a change in zero.  However, a complex test fixture for transmitting the load to the specimen may be subject to physical alteration. Mechanical fasteners can loosen or tighten; load links can undergo hysteresis or yielding; and bearing points within the fixture can shift from cycle to cycle. All are capable of producing a “no load” change in gage resistance. Also, differences in self-loading of the at-rest specimen may be an unexpected source of zero-shift.

Depending upon the method and magnitude of load application, the test specimen itself may undergo yielding, hysteresis, and creep. Specimen yielding is characterized by a zero-drift in gage resistance following a relatively high level of load-induced strain. Creep and hysteresis yield a zero-shift which often can be overcome by time and reverse loading, respectively.

The gage and measurement system are also potential sources of zero-shift and –drift.  Bubbles, adhesive starvation, and low-strength bonds caused by improper installation techniques are all sources of unpredictable zero-drifts. Chemical attack from residual solder flux or moisture intrusion into the protective coating can also produce permanent changes in gage resistance with time. Gage hysteresis, particularly at high levels of cyclical strain beyond the yield strain of the gage, results in both zero-shift and zero-drift. Gage creep (at high strains) and thermal output (at both high and low strains) are common sources of zero-shift.

Resistance changes associated with strain measurements are small enough so that poor electrical connections within the measurement system may cause relatively large zero-shifts.  Solder joints, mechanical connections, and switch contacts warrant careful attention. The appearance of zero-drift in a gage may occur if the measurement instrumentation experiences a component failure, instability, or an accidental change in zero balance.

All of these sources of resistance change (and apparent change) can be readily identified and eliminated by using sound, time-proven installation and verification techniques.  In the interim, our Applications Engineering Department is available to assist you in making high-quality strain gage installations. Should you experience a situation involving an unexplainable change in zero, don’t hesitate to contact them at mm@vpgsensors.com .