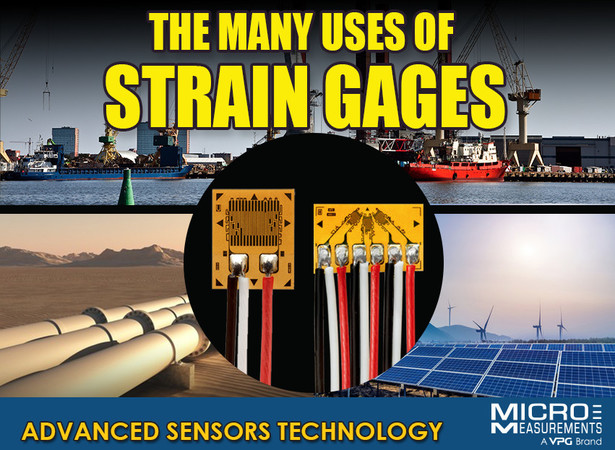 Where Do Our Strain Gages Go? Crane, Planes, and Your Dishwasher….

Once a strain gage leaves the Micro-Measurement manufacturing site, the applications which engineers find for the device are almost too numerous to count. Many Advanced Sensors Technology strain gages are used in the branch of engineering called “Experimental Stress Analysis,” while other gages are sold to manufacturers of transducers (OEMs) to be embedded in sub-systems or equipment.

For experimental stress analysis applications, strain gages are used to validate the design assumptions for structures, and to assure that the structure will perform as the designer intended.  For these uses, the engineers bond the gage to structures, actual service parts, or new design parts, to test and measure applied service loads. Using a strain gage with one of Micro-Measurements’ data acquisition and analytical instruments, engineers can quickly and accurately validate the performance of many everyday items, including information signs on our interstates, automobile parts, aircraft structures, and many of the appliances we use daily such as the washing machines and dryers..

For the embedded or OEM applications, a transducer is a device which converts one form of energy to another.  In the case of a strain gage based transducer, mechanical load or force input is converted into an electrical output, thus enabling the user to electrically read input forces such as torque, force, weight, pressure or displacement.  The scales in a medical office and the electronic scales in the Shipping Department or a grocery store use a strain-gaged beam to sense the weight applied – the transducer beam in each scale converts the weight to an electrical signal which is then displayed in the desired unit of measure. Manufactures of transducers carefully install our strain gages on their parts and wire them into a proper electrical circuit. Each transducer is then loaded with known loads and the resulting electrical output recorded. This process is known as “calibration.” Once a transducer has been calibrated, unknown loads can be applied to the transducer and precisely measured by comparing the gage output to the manufacturers’ calibrated values.

With our CEA Advanced Sensors strain gages, transducer manufacturers can make everything from pharmaceutical balances with weighing resolution in milligrams to weighing systems that mount on heavy lifting cranes capable of measuring forces of hundreds of tons. In the case of the crane onboard weighing system, the strain gage based transducer / display informs the operator if the load being raised is within the safe limits of the crane and will not cause the crane to tip. In this application, the transducer is connected between the crane hook and the cables; and the strain gage output is sent back to the crane cab via a strain indicator and recorder. The DAQ or strain indicator digitized (Analog to Digital process) provides a real time display of the weight on the hook and can be programmed to sound an alarm or show an alert on a screen if the load is too heavy or close to a threshold. This allows the operator to stop the lift before the crane is toppled or damaged.