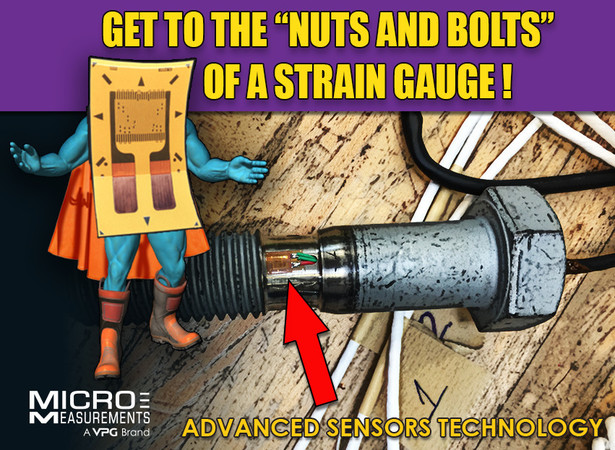 What is a Strain Gauge Sensor and How Does It Work?

It’s difficult to comprehend quite how much strain gauges affect your everyday life, either directly or indirectly. Today you have already seen a strain gauge in operation or used a product that used strain gauges during its development. You may have weighed yourself, had some food, used your mobile phone, or travelled to work; all examples of where they have been used. This article is a layman’s introduction to what these sensors can do.

What is a Strain Gauge?

There are many different forms of strain gauges, but the most common is the foil resistance type. It consists of a very thin foil bonded to an insulating backing, and the foil is etched so that it looks like a long piece of wire that has been zig-zagged (early strain gauges were actually made out of thin wire). This foil and backing combination are often thinner than a human hair.

In use, the strain gauge is bonded to a surface. Once properly installed and connected to an appropriate instrument, the gauge responds to surface deformations called strains.

Strain is defined as a physical deformation, or change of shape. This is most often caused by applying a change of load, for example sitting down on a chair causes it to change shape. It is most easily demonstrated using an elastic band; pull the band and it gets both longer and narrower. By measuring this change we can calculate a value for that change. This value is known as strain, but because the changes can be small it’s most common to use microstrain.

The change in the elastic band is large and visible, but a strain gauge can measure changes that are literally invisible – can you see the chair leg shortening when you sit down?

For an idea of what they can detect, imagine a one metre rule. If you pulled on this to change its length by one micron (one millionth of a meter, or one thousandth of a millimeter) then the strain gauge can easily detect this. To put it another way, an average human hair is around 100 microns diameter, so a strain gauge can detect a change of 1/100th of a human hair in 1 metre. This analogy represents one microstrain.

Stress is the pressure in the material due to the load on it. In the case of the elastic band above, when you stretch it you can feel the force trying to resist your pull – this is the stress. When you let go it will return to its original shape and be free of stress. In engineering terms stress is defined as a force per unit area, in the same way that we define air or liquid pressure – pounds per square inch, Newtons per square metre, or millibars as used in weather reports for atmospheric pressure.

Stress in a solid cannot be measured in the same way as liquid or gas. If the material properties are known, and the strain measured, the stress can be calculated.

How Does a Strain Gauge Work in Stress Analysis?

Every product that we use must be strong enough to survive the intended use. Known as stress analysis, it is performed using various techniques including computer modelling and real-world testing. Strain gauges are bonded to the structure using specific products and well-defined techniques. The gauges are connected to a measuring device, or instrument. Information is then recorded and analysed, most commonly using a computer. The measured strains are converted to stress values and it is this that the engineer uses to analyse the structure’s ability to survive the intended and sometimes unintended loads. For example, an aeroplane must survive take-off, in-flight and landing loads as well as in-flight air turbulence. Watching an aeroplane’s wings shake and wobble in flight can be disconcerting, but this is exactly what the engineers tested for, and in fact this flexing is designed to happen!

How Does a Strain Gauge Work in a Transducer?

The word transducer is defined as a device that converts one type of energy into another, most commonly physical inputs into electrical outputs. Strain gauge transducers convert physical deformations (strain) into electrical signals that can be recorded and displayed. They comprise of a metallic element with strain gauges bonded to it. For example, a bathroom scale converts your weight into a signal for the electronic display via one or more small transducers. Strain gauge-based transducers are often referred to as load cells when used for precision weighing applications.

These devices are extremely accurate. For example, supermarket transducers must be able to accurately weigh items to 0.03%. They must also be capable of weighing both 5kg (11lbs) of potatoes and 25g (1oz) potato crisps (chips), especially if you self-scan to ensure that the scanned items are placed on the bagging area.

Where can I find a strain gauge?

As mentioned at the beginning of this article, strain gauges are everywhere! From the obvious kitchen and bathroom scale, every product sold by weight, to the vehicles and infrastructure you use to get to work, it all uses or has used strain gauges.

VPG Micro-Measurements are a world-renowned expert in strain gauges and associated products, from the surface preparation materials and adhesives, wires and coatings, to the instruments used for simple tests to multi-thousand channel systems. We can help with choosing the right products, whether for simple short-term testing or long-term monitoring.