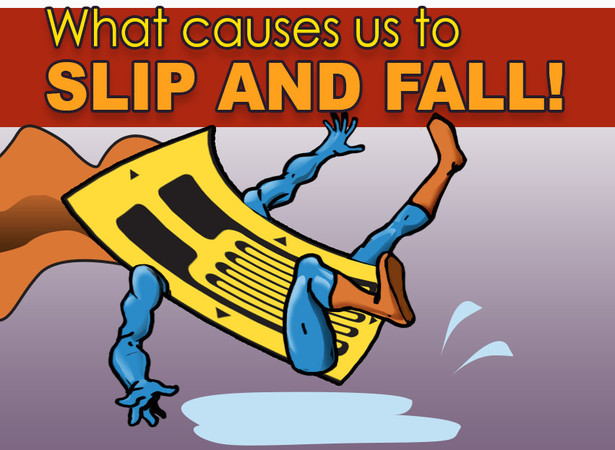 What causes us to slip and fall?

The ratio of the force applied to an object parallel to the surface the object is sitting on, that is required to start movement of the object, divided by the normal force of that object to the surface, is the static coefficient of friction, or stiction. For most cases, like people walking, the normal force is the force due to gravity, or the object mass multiplied by the gravitational constant, g (6.674x10-11 m3/kg•s2); or, more simply, the weight of the person.

Stiction is that property between two materials which involves all three of Newton’s laws of motion. Stiction attempts to keep an object at rest, it fights acceleration of the object, and it provides a stout equal and opposite force. The force required to overcome stiction truly falls into the camp of the Newtonian forces.

Stiction presents itself daily in a plethora of ways, particularly on wet or icy walking surfaces. You’re walking along just fine when BAM, you find yourself on the ground! You’ve overcome the static friction required to lose traction, and your feet fly out from under you. Taking baby steps and trying to keep your feet flat against the surface are ways to achieve maximum normal force relative to parallel force, and maximum friction between your shoes and the wet or icy surface, respectively. But, maintaining that delicate frictional balance is tricky.

So, if forces are involved, then strain gage sensors can be used. How so?

A test platform could be constructed using strain-gage-based transducers to weight the object (just like is done at the deli), and a strain-gage-based fish scale could be attached to a cable that pulls the object across the surface. Thus, both the vertical and horizontal forces are measured simultaneously. Different surface materials and various lubricants can be applied to either the moving object or static platform to simulate different scenarios.

Next time you find yourself unexpectedly lying on the sidewalk, call Micro-Measurements applications support on 919.365.3800 to learn how foil strain gage sensors can help.