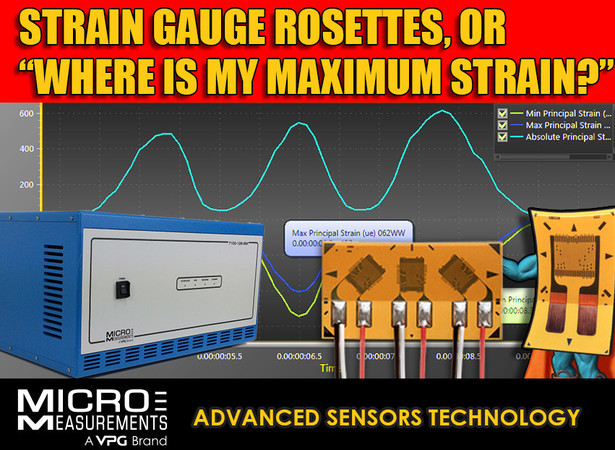 Strain Gauge Rosettes, or “Where is my maximum strain?”

It is a commonly-known fact that strain gauges pick up strain in one direction only. This may result in a strain reading that is not aligned with the peak strain and therefore the value can be significantly lower, or even zero, compared to the actual peak strain. Commonly-known engineering phenomena such as the onset of buckling may cause the direction of peak strain to be unknown or may change significantly as load increases. Despite this, many stress analysis applications often use single gauges in all measurement locations.

A simple solution is to mount a three-element strain gauge rosette, most commonly a rectangular rosette, i.e. with the grids orientated 0-45-90°. This allows calculation of the principal strains (maximum and minimum) from the three measured strains. Below are typical gauges – a prewired sub-miniature gauge with 0.36mm grids, and a more typical 3mm grid gauge. 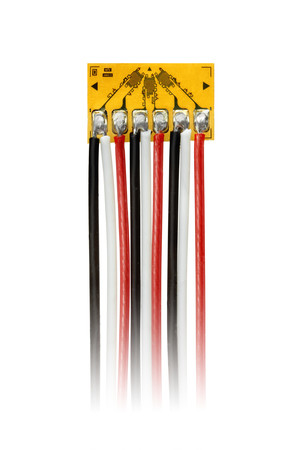 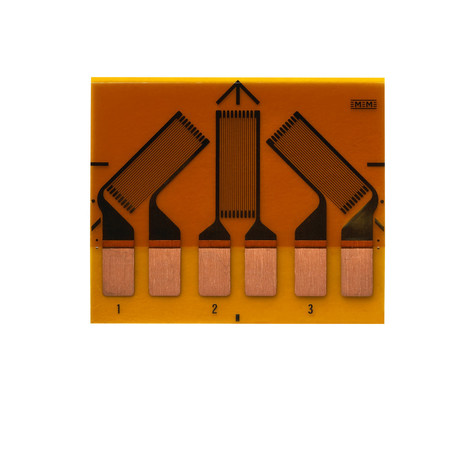 It may also not be obvious from a casual perspective that Hooke’s Law is not directly applicable to the majority of engineering measurements. Hooke’s Law states that stress is proportional to strain, but this statement is often used to multiply strain by Young’s modulus to get stress. This simplistic view is only applicable in uniaxial stress such as pure tension. For all other situations (and for confirmation where uniaxial stress is assumed) strain in two directions must be known, the maximum and minimum principal strains. Coupled with the material properties (Young’s modulus and Poisson’s ratio) the stress at the measurement point can be calculated with confidence. For more information search StrainBlogTM for an article titled Hooke’s Law is not Ohm’s Law.

The graph below shows a typical loading case; note that the peak measured strain (microstrain Grid 1, yellow) indicates 202µƐ (microstrain). Then compare this to the actual peak strain from the calculation (Max Principal Strain, mid-blue trace above it) which is actually 462µƐ, a difference of around 130%! In this case Grid 1 of the rosette is misaligned by 41° from the Maximum Principal Strain, hence the very large difference between the measured and calculated (true) microstrain.

For negative strains the problem can be additionally problematic. If the test specification is to report the peak strain only, and this is sometimes interpreted and the Maximum Principal Strain, there is a potential for another error. The example below shows the Max Principle strain (blue) is -453µƐ and the Min Principal Strain is -613µƐ, a 35% difference.

To avoid this issue our StrainSmart software has the option to display and export Absolute Principal Strain, so if peak strain is the only test requirement then this will report the maximum change from zero as a positive strain.

Also, it must be noted that the Angle calculation points from Grid 1 to the Maximum Principal Strain, and therefore in this case the calculated angle to the Absolute Principal Strain (peak strain) is 90° from the reported value.

It can be seen that the three measured strains (grids 1, 2 and 3) are irrelevant except that they are the input data to calculate the actual peak strain values (maximum and minimum principal strains). Reporting the measured values, or using them in further analysis, could result in significant deviations and potential catastrophic failures of the structure under test. Reporting the calculated values represents the strains in the structure, and therefore enables analysis for more accurate maintenance or failure predictions to be made.

The obvious conclusion is that rosettes should be in common use for general stress analysis applications, and that it is essential to report the calculated, and not the measured, strains.

The above graphs were produced from a PCBA (Printed Circuit Board Assembly) demonstrator. Our StrainSmart 7100 software and system was used for data capture, calculation and graphing. This accurately mimics what happens during real tests on PCBA production lines for qualification and reliability. We can all thank the reliability of our cars and mobile phones on tests like these – a subject for a separate article. 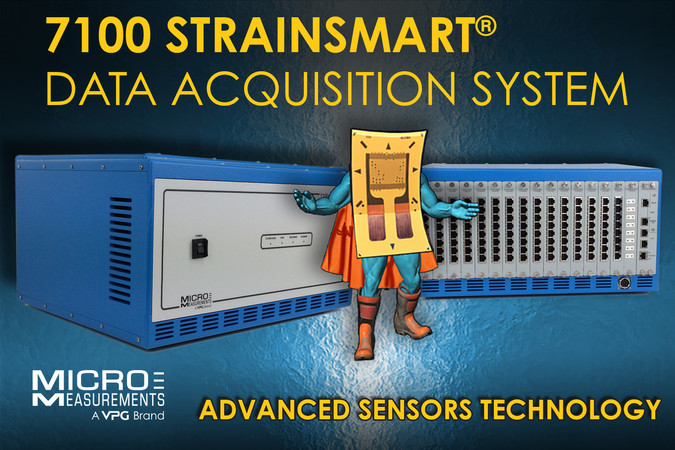