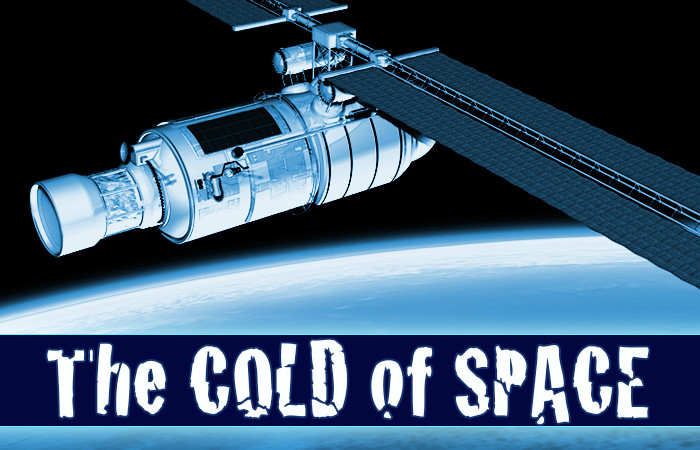 Strain Gages in Outer Space – – or even in a meat locker

Considering that a primary motivation for inventing the bonded, electrical resistance strain gage was to reduce propeller failures on military aircraft in the 1940’s it should be no surprise that strain gages found their way into aerospace applications. During the 1960’s and 1970’s it was common to find articles in technical journals, written by engineers at aerospace companies, discussing the use of strain gages at cryogenic temperatures.

Outer space is cold! Well, actually, outer space is a vacuum and temperature only becomes relevant when an object like a strain gage mounted to a specimen is introduced into the vacuum. But, anyway, just how cold is space?

If you travel far enough away from the sun (well past Pluto) and step outside your spacecraft, then it’s about -270°C (-455°F). Whether using strain gages or some other technology, temperatures different from typical earth-bound laboratory values (24°C, 74°F) complicates a strain measurement test program. A test temperature near absolute zero (0°K, -273.15°C, -459.67°F) really complicates things, and requires special techniques and considerations to achieve reliable, meaningful data; or, just to avoid catastrophic failure!

To begin, there is the specimen itself. All materials change dimensions with changes in temperature. For common aluminums, this temperature coefficient of expansion (TCE) is about 23 ppm/°C (12.8 ppm/°F). This means that for every 1°C change in temperature, an aluminum bar will change dimension by 23 ppm. For example, a 100 mm long bar made from 2024 aluminum will change length by 2.3 µm for every 1°C change in temperature. In outer space the delta temperature is approximately -294°C. The 100 mm bar would shrink by over half-a-millimeter in length. Thermal stress analysis is, therefore, an obvious design requirement for spacecraft, and strain gages are well suited to the task. How is this shrinkage relevant to structural design?

If our chief design engineer, Mr. Rube Goldberg, were to design a spacecraft, then he may construct a door latch mechanism somewhat similar to the one shown in the following schematic. 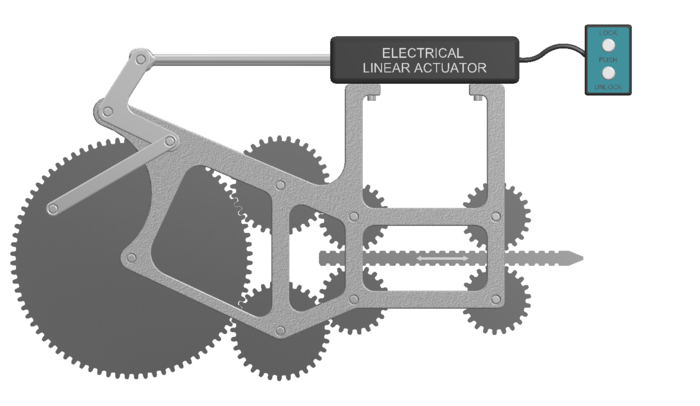 Although functional on earth under normal ambient conditions, this design highlights the need to exercise caution when mixing structural materials when the structure is subjected to extreme environments. With the cast aluminum (TCE = 23 ppm/°C) structure holding the Invar (TCE = <2 ppm/°C) gears in place, then once subjected to the deep freeze of outer space, this device would undoubtedly tear itself apart; the result of excessively large thermal stresses caused by the mismatch between material TCEs. Back to strain gages.

The most obvious concern for collecting good strain data using rolled-foil strain gages in an extreme environment like outer space is the proper accounting for thermal output. This is, in fact, one of the more simple issues to handle. The real problems are associated with gage installation technique, and picking the right gage construction and installation accessories to survive the environment.

The de facto gage construction for deep-space (cryogenic) applications is a laminate series gage like the SK-Series and WK-Series offered by Micro-Measurements (M=M). This construction utilizes a glass-fiber reinforced epoxy-phenolic backing, making it tough and strong enough to survive extreme conditions, and the Ni-Cr alloy grid provides the best performance at ultra-low temperatures.

If elevated-temperature curing is available, then M-Bond 600 or 610 are excellent choices for bonding adhesive. Either adhesive provides a thin, hard glue line and excellent surface adhesion; both being necessary to survive the thermal deformations encountered in cryogenic environments. In the absence of elevated temperature cure, then M-Bond AE-10 is a good choice. It also provides a thin, tough glue line that works well at cryogenic temperatures. AE-10 can also be used as the protective layers overtop the gage installation, including serving as the lead wire anchor coating.

Because of tin-disease at cryogenic temperatures, solders should either have a low content of tin, or be alloyed with antimony. Micro-Measurements 361A-20R is a good lower melt-temperature choice, or 570-28R is a better choice for long-term exposure to cryogenic temperatures (like your next trip to Pluto). Teflon® insulated, silver-plated wire, like M=M 330-FFE or 336-FTE is the best lead wire choice, because Teflon® exhibits low outgassing.

Of all stress analysis applications, testing at cryogenic temperatures demands that consideration is given to thermal output. Reviewing the limited-range thermal output plot below supports the previous statement that Ni-Cr alloy (K-alloy) is the better choice for deep-freeze testing. Even at a relatively warm -40°C, Ni-Cu alloy (A-alloy) thermal output is already plummeting. 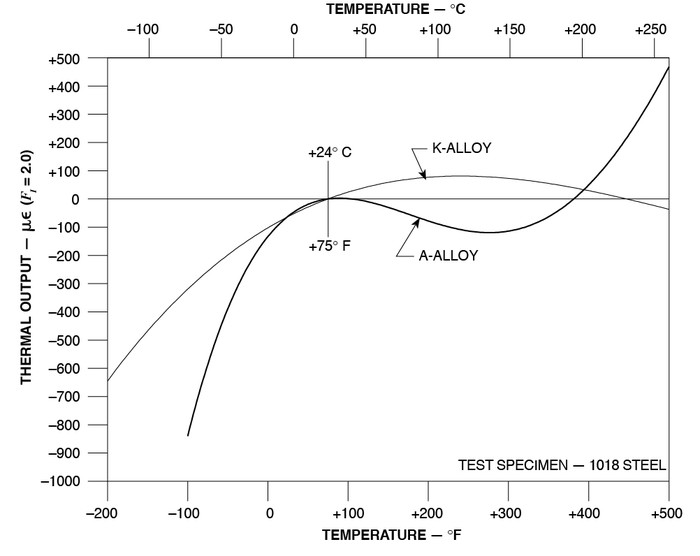 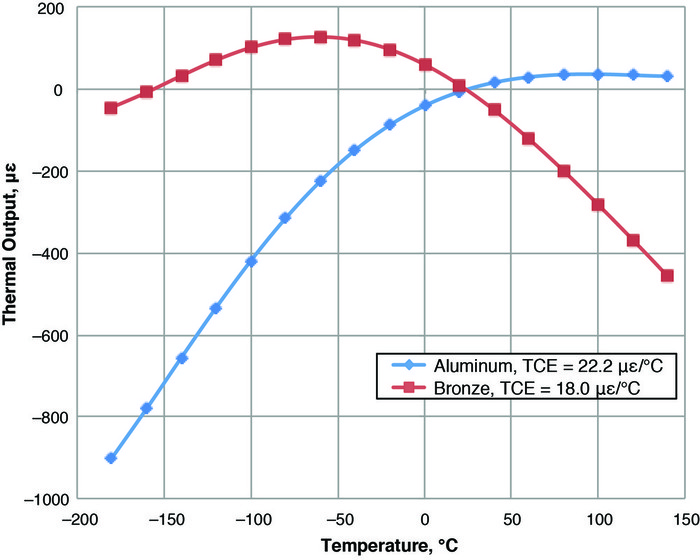 Perhaps the most popular method for controlling thermal response of strain gages is by using two gages wired into a half-bridge configuration (see below). The half-bridge can be two active gages (both sensing strain), or it can be built-up using one active gage and one compensating, or ‘dummy’ gage. The dummy gage is bonded to the same material as the active gage, but the dummy gage experiences no strain, only the same change in temperature as the active gage. When wired as a subtracting half-bridge as shown, then the temperature signals will cancel in the bridge and only the strain component survives. 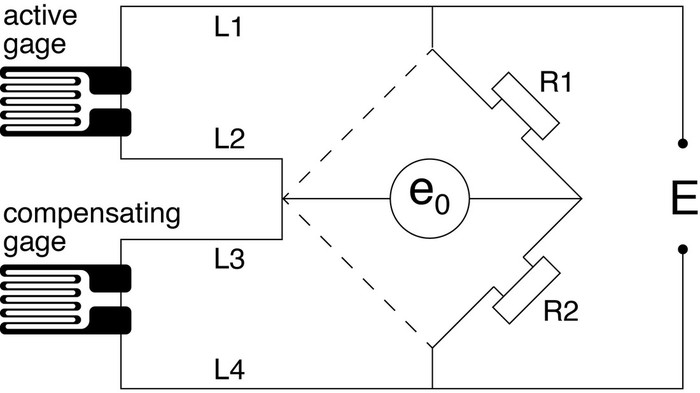 To discuss using strain gages successfully in outer space, or anywhere else, please contact an applications engineer on 919.365.3800 opt. #2. And don’t forget to visit the website at www.micro-measurements.com for detailed information on strain gages, instruments, and installation accessories.