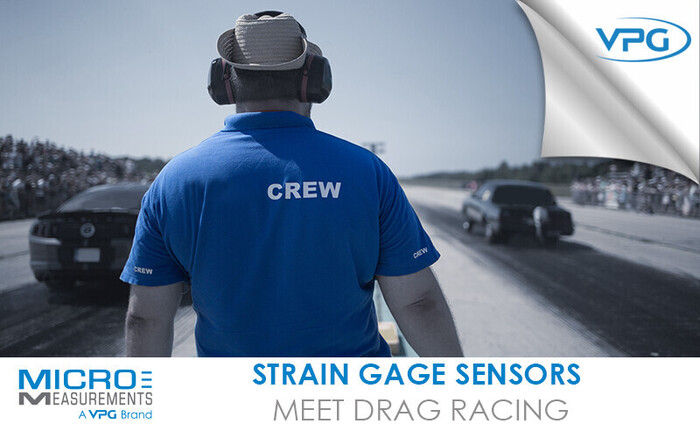 Strain gages are used in industries that span the globe, from shipping to aerospace to … auto racing? Yes, you will find strain gage sensors in many places, few more exciting than inside a top-of-the-line dragster.

In the sport of professional drag racing, every fraction of a second counts. For Kalitta Motorsports, maximizing performance meant real-time data acquisition on-track. This vehicle performance data would enable the team to optimize vehicle setup of its 8000HP Top Fuel dragster. The team needed a torque measurement at engine out, clutch out, and at the wheels, which would help team Kalitta determine horsepower transfer from the engine to the rear axle, conduct engine diagnostics, and improve wheel lock-out at launch. Luckily, the team knew about our strain gage sensors.

In order for the Kalitta team to be able to take on-track measurements, the strain gage and sensor technology they used had to be compact, lightweight, and highly accurate over a range of temperatures. In addition, the data had to be transmitted wirelessly. Wired transmission would prove too cumbersome, as the mounting locations were difficult to access once the vehicle was assembled.  Wireless data transmission was also necessary because the data was being collected on shafts spinning at high speeds. To meet its requirements, team Kalitta used TECAT Performance Systems' WISER data acquisition/communications system and Micro-Measurements’ strain gage sensors.

The Kalitta team seeks to be competitive at the highest levels of their sport, where every team is collecting and crunching data to achieve that slightest advantage that could make all the difference in a tight race. To obtain the data necessary to gain a competitive edge, the strain gage sensors were mounted to the surfaces of the engine crankshaft, the clutch, and the rear axle. Next, TECAT’s WISER systems — real-time data acquisition systems that provide resolved live torque measurement data — were mounted to the same components and connected to the strain gauges with ribbon cable. The complete systems were mounted without the team needing to modify the vehicle components themselves. This enabled the Kalitta team to build the vehicle as they would for a race, without alterations, and collect data on-track. But to make sure that the systems would be reliable during races, the team mounted the systems and then tested them prior to races. These tests showed that the strain gauge system worked effectively. The team could count on the torque measurement and data acquisition system to help optimize vehicle setup in subsequent races.

In the above image, you see the complete system mounted to a test bar. The Micro-Measurements strain gage sensor is connected to the WISER data acquisition/communications system, and both are powered by the lithium poly battery seen at the top.

From aerospace to biomedical technology to drag racing, strain gage technology can help to power the science behind your industry. To learn more, connect with other strain gauge experts on StrainBlog! Here’s how: