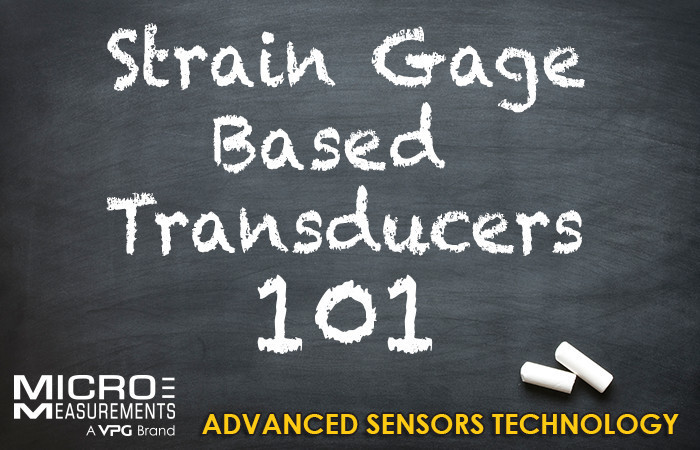 “The resistance Advanced Sensors Technology strain gage, because of its unique operational characteristics, has dominated the transducer field for the past ten years or so.”

We concern ourselves here with a specific class of transducers: devices which translate an input of mechanical energy into equivalent electrical signals for measuring and/or controlling the input phenomena. This type of electro-mechanical transducer is usually located at the source of the physical force or energy, and responds to its magnitude. The readout or control instruments can then be positioned an any convenient distance from the transducer and connected to it by electrical wiring.

Certain forms of transducers have their own family names which usually derive form the physical phenomena they measure. Examples include accelerometers, extensometers and vibrometers.

Generic and custom transducers can be, and are, manufactured on many different operation principles – resistive, inductive, capacitive, piezoelectric, etc. The true origin of the strain gage transducer (and the strain gage itself, for that matter!) is lost in history. Lord Kelvin reported on the strain-induced resistance change of electrical wires in the 1800’s. In 1908, Dr. St. Lindeck of charlottenburg in Germany suggested what might be the first bonded strain gage pressure transducer. He was working with precision resistors which consisted of fine manganin wire wound on thin-wall brass tubes. The construction method involved coating the wire with shellac, and baking the assembly, firmly bonding the wire to the tube. In a study of factors affecting the stability of such resistors, St. Lindeck closed off the ends of the tubes, pressurized them internally to about 800 psi (5.5 MN/m²), and found that the coil changed resistance in linear fashion with pressure. His report stated, “A method of measuring high pressure can possibly be based hereon.” ( emphasis by St. Lindeck). Figure 1.1 is an illustration from U.S patent No. 2,365,015, issued to E. E Simmons in 1944, for a bonded strain gage pressure transducer. While it is certainly not true that “there is nothing new under the sun,” it is difficult to be completely original!

E. E. Simmons and A.C. Ruge are generally credited with being co-inventors of the bonded wire strain gage. Ruge, in particular, was instrumental in introducing many practical forms of bonded gage and various types of transducers which incorporate it. Unbonded wire strain gages were known and used in transducers, both before and after the introduction of the bonded gage, but they were much less versatile and less accurate.

The Bonded Strain Gage as a Transducer Element

No single sensing principle is perfect for all transducer applications. And, like all other known sensors, the bonded strain gage has certain limitations. To take full advantage of its characteristics – to optimize a transducer design from cost and performance standpoints – it is essential to understand both the virtues and shortcoming of the foil strain gage, and the various forms they take.

First, the operating principles of the different sensor types should be well understood, and a transducer selected whose response mode is compatible with the measurement problem. Suppose one wants to measure displacement over a range of, say, one centimeter. In such a case, the most practical sensing element would normally be one which responds directly to displacement. Possible choices would include differential transformers (LVDT’s), optical encoders, or linear potentiometers. The various specifications for size, accuracy, cost, operating environment and, to some extent, type of output signal desired, will dictate the final selection. In this example, a strain gage system would normally not be the first choice since the strain gage responds to strain, not displacements.

In some cases, the choice of sensor will depend more on special performance features needed in the transducer than on the primary actuation mode of the sensing device. If a displacement range of one millimeter were needed in the above displacement transducer, together with long life, wide frequency response, shock resistance, and moderate restoring force in the actuator probe, a full-bridge strain gage network mounted on a cantilever spring might be a very appropriate solution.  (In this new video vijay dmonstrates a DIY Linear Displacement Sensor)

The point to be made is this: certain forms of transducers are well suited for bonded metallic Advanced Sensors Technology strain gages, and others are not. If strain gages are used where they are not a logical first or second choice, the end result will not be optimum.

The most significant operational characteristics of the bonded metallic resistance Advanced Sensors strain gage for transducer applications are presented below. Keep in mind that the strain gage responds to surface strain in a structure, and that in all normal uses a suitable elastic structure must be carefully designed into the transducer. This elastic element is often referred to as a “spring,” since it usually provides the required resisting and restoring force. The configuration and material selections for the spring element are often the most critical decisions made in successful transducers design.

Fully bonded to basic spring structure: Together with (1) above, this freedom from critical mechanical connections – or “loose parts” – results in rugged, shock-resistant construction.

Excellent linearity over wide range of strains: In most cases, overall linearity will be limited by characteristics of the spring element rather than Advanced Sensors Technology strain gage.

Circuit output is a resistance change: The resistance strain gage is a passive (as opposed to self-generating) sensor. Because it is essentially insensitive to supply-voltage frequency, it can be used with AC (carrier) or DC excitation systems. Strain gages operate in some form of a bridge circuit, and these circuits can be easily arranged for altering transducer response through the addition or subtraction of moments and forces. This permits relatively straightforward design of complex transducers which respond to (or reject) multiple components of input force as required.

Thermal degradation: Strain gages employing organic materials as carriers, adhesives, and protective components are the most accurate, versatile, and easily used, but are limited in high-temperature applications by the characteristics of the particular organics employed. Maximum operating temperatures for such transducers generally range from +150°F (+65°C) to perhaps +500°F (+260°C), depending on specifications, time of exposure, and operating environment for the strain gages. Low temperatures do not cause serious problems, and transducers for use at cryogenic temperatures are easily designed.

Output signals are relatively low: Accurate, stable amplification and controlled excitation voltages are essential for accurate readout instruments. With modern electronics, however, this does not normally present a significant cost problem. System accuracy is often more limited by signal-to-noise (SNR) ratio, which is quite good for strain gage transducers because of their low-reactance circuits and moderate ohmic resistances.

Careful installation procedures required: Bonded strain gage performance is strongly affected by the materials and procedures used to bond the strain gages in place, wire them into the circuit, and provide protection against handling damage and environmental factors. Without careful, rigorous control of every aspect of the installation process, predictable low-cost transducer production cannot be achieved.

Moisture effects: Simple, organic protective systems for bonded resistance strain gages can be effective, but will have only limited life when exposed to excessive moisture. With time, water will reach the strain gages and destroy or degrade their performance. For reliable long-term accuracy under such condition, true hermetic sealing of the transducer is essential.

Strain Gages: Strain gages are resistive sensors whose resistance is a function of applied strain (unit deformation). Stress is calculated from the strain information. Typically a strain gage is attached to a structure and when such a structure is deformed (tension, compression, shear), the resistive strands in the strain gage follow the structure deformation which causes an electrical resistance change. The resistance change is then expressed in units of strain or stress. Strain gages are used in transducers that convert force, pressure, tension, etc., into an electrical signal. They are also used for measuring strain in structures (stress analysis) such as airplanes, cars, machines, bridges and other structures. Performance specifications to consider when searching for strain gages include operating temperature, the state of the strain (including gradient, direction, magnitude, and time dependence), and the stability required by the application.

Load Cells: Load cells are mechanical components which act as force sensors by employing strain gages to provide an electrical output proportional to the applied force. Typically the electrical output is either analog (voltage or current) or digital. Load cells have specific mechanical packaging and sensing orientation to fit into electronic scales, and testing and monitoring systems. Load cells can be used for tension, compression, and/or shear measurement. Tension load cells are used for measuring forces that are in-line and "pull apart". Compression load cells are used to measure forces that are in-line and "push together". Shear load cells are used to measure tension or compression forces that are offset (not in-line). When selecting load cells, there are many form factors or packages to choose from to insure their physical size is compatible with space available for the application, such as inside an electronic weighing scale.