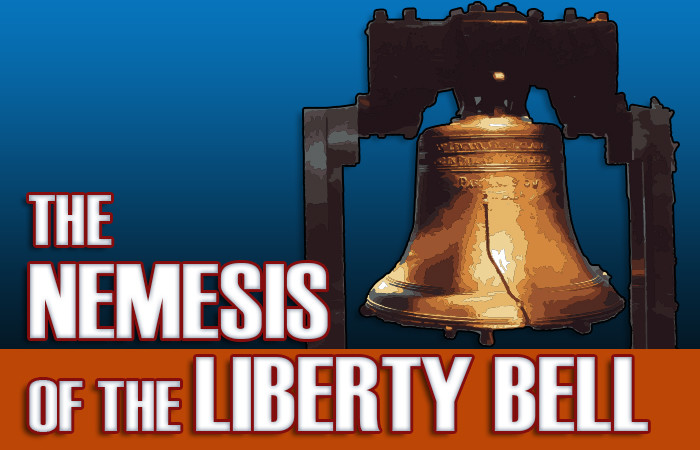 A classic (but by no means isolated) example of the destructive power of residual stress is evident in the American “Liberty Bell”.1  When cast, in Philadelphia in 1753, the inner surface of the bell was apparently chilled first.  Later, as the outer surface cooled and tried to shrink, the contraction was prevented by the already rigid inner portion.  This left the outer surface in a state of residual tensile stress.  In 1828, after 75 years of use – and possibly contributed to by overzealous ringing – a crack appeared in the lip of the bell.  The crack continued to grow, even after some rather clumsy attempts at repair, and after the bell was finally retired from service.  This could occur only due to residual stress.

There are numerous well-documented instances of product failure caused, directly or indirectly, by residual stress.  In some of the more dramatic cases, the member has suddenly ruptured, even though it was not loaded at the time, or had not yet been placed in service.  Most commonly, however, the residual stress acts in concert with other effects, such as corrosion and fatigue, to trigger premature failure of the product.  In many of the latter cases, the subtle, often insidious, role played by the residual stress goes completely unrecognized.

Notwithstanding the widespread occurrence of residual stress, and its importance in determining structural reliability, this subject normally receives very little attention in most engineering curricula.  And, perhaps not coincidentally, the quantitative consideration of residual stress remains one of the weaker areas in mechanical design.

The “stepchild” status of residual stress has its understandable causes.  To begin with, such stresses are, to a large degree, unpredictably variable in sign, magnitude, and direction as a result of the numerous manufacturing operations employed in arriving at a finished product.  In addition, the measurement of residual stress has historically been difficult, time-consuming, and costly.  Although recent developments have greatly simplified the measurement procedure (to the point where it is a routine practice in a number of laboratories), it is still one of the least accurate techniques of experimental stress analysis.

Furthermore, even when the residual stress magnitudes are known with acceptable accuracy, there are numerous ambiguities that impede the effective use of this information for design purposes.  The net effect of the residual stress depends, in an extremely complex way, on a variety of interrelated factors.  The type of material involved is, of course, a primary consideration – how brittle or ductile it is, how it responds to static and fatigue loading, etc.  Other factors include the sign, magnitude, and direction (as well as the distribution) of the residual stress with respect to the same parameters for the applied service stress.  Whether the service stress is static, cyclic, or a combination of the two can also be very significant.  These and a number of additional considerations make it difficult to formulate a generalized, systematic design procedure which quantitatively accounts for the presence of residual stress.

In common with most other phenomena, residual stress may be either harmful, or beneficial (or even neutral on occasion).  It is generally harmful if it is in the same direction as the critical working stress, and of the same sign.  Correspondingly, it can be beneficial if the directions are the same, but the signs are opposite.  The effects occur because the working stress is superimposed on the residual stress (as long as the resultant stress is below the yield strength of the material).  The superposition of the working and residual stresses can be, and is, exploited in many different ways to strengthen load-bearing members.  Since the most common mode of failure is tensile stress (e.g., in brittle materials generally, and in ductile materials under fatigue loading), the usual practice is to induce residual compressive stress in surface areas which will be subjected in service to the highest tensile stresses.  Among the more common examples of this are tempered glass and shot-peened machine parts.  Others include surface-rolled parts, nitriding and carburizing heat treatments, autofrettaged gun barrels, and (in a sense) pre-stressed concrete.

Demonstrating the Reality of Residual Stress

The residual stress distribution, as it exists in a typical manufactured part due to various production operations, is not generally quantifiable in terms of any coherent body of theory such as the mechanics of materials.  Because of this, the subject does not fit well into conventional course structures, and is often given only superficial classroom treatment, if mentioned at all.  But simply telling students about the existence of residual stress and its potential effect on structural reliability does not leave a very lasting impression.  The students, in their peculiar brand of wisdom, quickly conclude from the manner of treatment that the subject matter is peripheral to the course, and can safely be forgotten.  A demonstration, or laboratory experience in measuring residual stress, can help remedy this situation.

One of the more suitable materials for demonstrating the existence of residual stress is glass.  The reason is that glass can easily be melted, formed to the desired shape, and then cooled differentially to induce residual stresses.  A good example of this is the well-known “bologna” bottle.2 The bottle is blown with a heavy wall and extra thick bottom.  Rapid cooling of the outside surface causes that region to shrink and harden first.  Later, as the inner surface cools and tries to shrink with respect to the rigid outer surface, it is necessarily stressed in tension, and the outer surface in compression.  The outside of the bottle is strong enough to be used to drive nails into a board.  In contrast, the inside is so highly stressed in tension that a minute scratch, caused by dropping a small particle of carborundum into the bottle, will shatter it.

“Prince Rupert’s” drops, although less dramatic in demonstration potential, are also less expensive, and can be homemade after a little experimentation.  These are formed by melting the end of a glass rod with a torch, and letting the drops fall into a pail of water.  The congealed drops typically have long, slender, curved tails which should be shortened to about finger-grip length.  This can be done by holding the drop at the appropriate point on the tail with metal tweezers (to serve as a heat sink), and burning off the excess filament of glass.  The finished drops, because of the way in which they were cooled, are then characterized by residual compressive stress on the surface, and high tensile stress in the interior.  The demonstration exercise consists of trying to break off as small a piece of the tail as possible without shattering the drop.  When the drops are properly made, they will normally disintegrate the instant that any fracture front passes through the tensile zone in the interior of the tail.

Note:  Since glass fragments can be dangerous, adequate eye protection and other safety measures as necessary should always be provided for any experiments or demonstrations with this material.

For most laboratories, the simplest way to measure the residual stress in actual metal products is the hole-drilling (or “center-hole”) method.  In this procedure, a special-purpose strain gage rosette is installed on the test member at the point where the measurement is to be made.  After taking zero readings on the gages, a small, shallow hole (typically, 1/16-in dia by 1/16-in deep, or 1.5 x 1.5 mm) is “drilled” through a circular target in the center of the rosette.  New readings are then made on the strain gages, and the residual stress at the hole site is inferred from the changes in strain caused by relaxing the radial stress on the surface of the hole.

For accurate results, the hole must be very precisely centered with respect to the rosette axes.  A special alignment and boring fixture, called the RS-200 Milling Guide, is available from Micro-Measurements for this purpose.  In the softer metals such as aluminum and mild steels, the hole can be produced by drilling it, using a custom-ground end mill in place of a conventional drill bit.  A better procedure for harder metals is to drill the hole with a carbide dental burr, driven by a high-speed air turbine.  Micro-Measurements RS-200 Milling Guide provides tooling for both methods of producing the hole.

M-Bond 200 adhesive is typically used in residual stress analysis, as long as the measurements are within the temperature limits of M-Bond 200.  Micro-Measurements has an available application kit, the GAK-2-200, which contains all of the materials needed to apply the strain gage rosettes and make the installation complete and ready to connect to instrumentation.

Use of the RS-200 and residual stress rosettes is documented in Micro-Measurements Tech Note TN-503 “Measurement of Residual Stresses by the Hole-Drilling Strain Gage Method”.

1  Residual Stresses and Fatigue in Metals by John O. Almen and Paul H. Black. New York: McGraw-Hill Book Co., 1963. This book (now out of print) contains a great deal of practical advice on controlling residual stress, and includes other case histories and examples of both the beneficial and detrimental effects of residual stress.