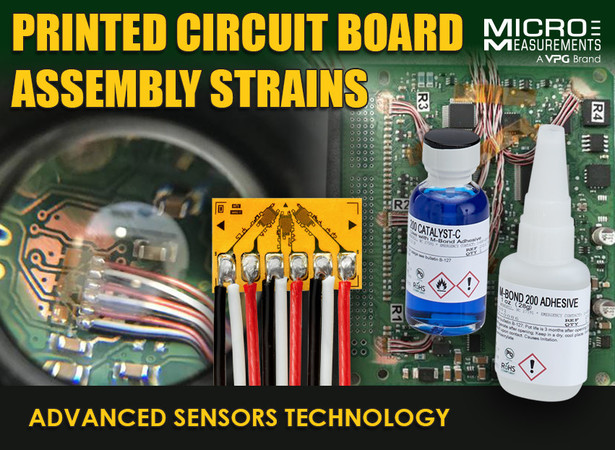 Strain testing for PCBAs is an essential tool to improve reliability of modern electronics. Minimising the strain during production processes and handling reduces the potential for latent failures in components and the PCB itself. Micro-fractures can pass production ICT (in-circuit test) but fail some weeks, months or years later in the hands of the customer. Warranty claims or a reputation for poor product performance and reliability can be very costly.

The details of how to run a test can be found elsewhere, within our own literature, videos and hands-on training. Our products, including our instrumentation and software, enable best-available support for this process. It is very important to understand what strains are required to be reported, and the potential dangers from not following the protocols.

Most commonly a three-element rosette is used for capturing the strains on the board. This results in three channels of measured strains. However, these quantities are coincidental to the actual strain on the PCBA. A previous article covers the potential large errors between the measured and calculated principal strains. For PCBA testing there are also two other metrics, diagonal strain and strain rate.

Defined as the maximum strain in the direction of grid 2 (the diagonal gauge at 45° to grid 1) or a strain at 90° (grid 1 + grid 3 – grid 2). This is described in some literature as the main cause of damage at the corner of a BGA. Unfortunately, this can be significantly lower than the maximum principal strain.

In some cases damage can be caused by a rapid change of strain, rather than a fixed maximum. Most commonly calculated as a change of strain per unit of time per data point (point-by-point analysis).

A strain field always has a maximum and minimum principal strain. The angle (in relation to grid 1) can also be found, useful for failure diagnostics. Full details of the calculations can be found in our technical literature.

It should be noted that what is really required is the maximum change of strain, and because the values can sometimes be negative the Maximum Principal Strain can be smaller (less negative) than the Minimum Principal Strain. For this reason, both Max and Min are normally reported, or look for absolute values (ABS function in spreadsheets).