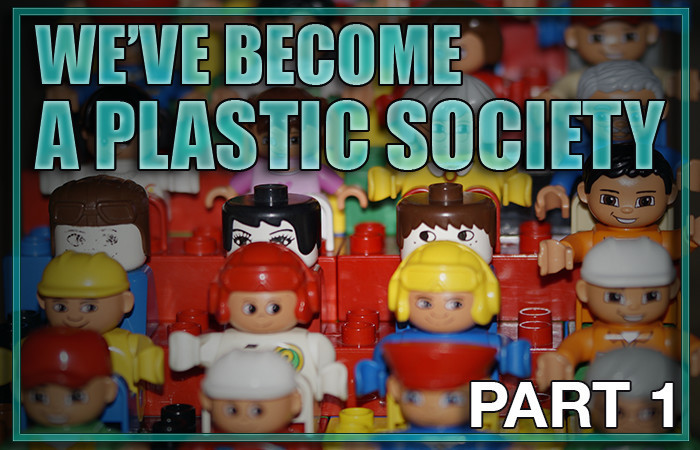 Polymeric Materials – in a word, Plastics (Part 1 of 6)

Audiences laughed when Benjamin Braddock received a one-word bit of poolside wisdom — «Plastics» — in The Graduate, but in retrospect that advice seems prescient.  Since that solemn admonition in 1967, the use of plastics has skyrocketed. From Legos to high-performance airplanes, plastic materials are used in practically every industry. Today it would be hard to envision life without plastics. According to SPI, the plastics industry trade association, the plastics industry accounts for more than US$374B in annual shipments and directly employs nearly 900,000 people.

For experimental mechanics, polymeric materials present unique challenges. Their diverse nature makes it difficult to prescribe generic measurement solutions. Fortunately, there are many common requirements for making strain measurements on plastics. This series of articles on the stress analysis of polymeric materials attempts to cover those requirements, pointing out specific nuisances as appropriate. In particular, we will cover those unique challenges encountered when using rolled-foil strain gages on plastics, only digressing to other measurement technologies when it is fruitful to do so. Before we can discuss solutions to the unique strain measurement challenges presented by polymeric materials, we must first discuss the important differences of these materials when compared to the traditional structural metals.

As a general statement, the ubiquitous electrical resistance strain gage is indifferent to the substrate onto which it finds itself attached. Strain gages sense and respond to, well, strain. How that strain arrives to the gage is immaterial. But the devil is in the details and without due consideration and planning, strain gages can report something from the specimen which has little to do with anything the stress analyst is interested in.

One of the more obvious, and also one of the most significant differences between plastics and metals with regard to experimental mechanics is the basic material properties such as modulus of elasticity. As illustrated below, the elastic modulus for unfilled and reinforced plastics can be two (or more) orders of magnitude lower than for metals. These lower elastic moduli can lead to high deformations when plastic specimens are placed under load. By nature, most polymeric materials can handle much larger deformations before failure, with strains easily exceeding one-percent. These relatively high-elongation strains place special demands on installation procedures, especially bonding and wiring.

A lower elastic modulus also suggests a softer material, which can result in reinforcement by the installed strain gage. Difficult to assess and correct, skewed strain readings caused by reinforcement from the gage can lead to strain measurement errors of several percent. Below is a moiré fringe pattern showing the deformation distortion of a ¼ mm thick piece of dead soft, pure copper from a Micro-Measurements (M-M) EP-08-125AS-500 loaded in pure tension. This copper has an elastic modulus of about 1.4 GPa at ~3% strain, which places it in the range of plastic materials. The photograph clearly shows the reinforcement caused by the installed strain gage. The gage reported approximately 3% strain, but the moiré analysis shows a ‘bulk’ specimen strain away from the gage site of just over 3.3%; or, a 10% error from the gage reading.

When considering engineered materials like reinforced composites, the situation is even more complex, because those materials often have materials properties which vary with direction. As illustrated below for a unidirectionally reinforced graphite epoxy, the elastic modulus is lowest in the direction transverse to the fiber orientation, but is still low at any angle greater than about 30 degrees on either side of the fiber direction.

Given the differences in elastic modulus between metals and plastics, it is no surprise that Poisson’s ratio, ν, can also be quite different (see below). The Poisson’s ratio for plastics typically falls in the range from 0.35 to 0.45; and values for random-fiber-reinforced plastics do not differ greatly from this range.

And, as if these material property differences between metals and plastics weren’t enough to cause headaches amongst strain gage users, polymeric materials properties also tend to be heavily influenced by temperature. Not to mention the much larger Coefficient of Thermal Expansion (CTE) for plastics (both unfilled and reinforced), which makes self-temperature-compensation more difficult, certain materials properties like elastic modulus vary markedly as the temperature changes from that which was used to measure the property.

So, as promised at the beginning of this article, we’ve presented many problems and no solutions. There are still challenges ahead before embarking on those solutions. The next challenge is temperature and its effect on polymeric material properties and how that impacts strain measurement techniques.  Temperature is the subject  of our next installment  in this series on the stress analysis of polymeric materials.