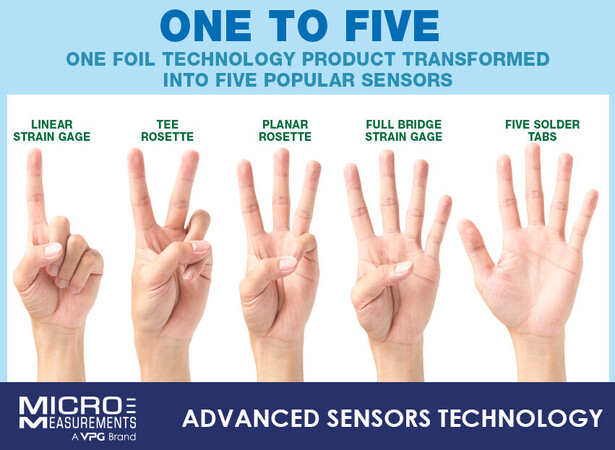 The strain gage pattern refers cumulatively to the shape of the grid, the number and orientation of the grids in a multiple-grid gage, the solder tab configuration, and various construction features which are standard for a particular pattern. The linear pattern strain gages are used to measure strain in a single direction.

T-rosettes are used where the direction of the principle strains are known. Strains at 90° enable calculation of the stresses at the measurement location, not possible with a single strain gage. Commonly used where tensile or compression material property tests are performed, they enable calculation of Poisson’s ratio as well as Young’s modulus. Using a T-rosette for this apparently simple test allows the user to make transverse sensitivity corrections for maximum accuracy of the test results.

In column load cells for example, the Tee Rosette strain gages are utilized to cancel bending strains and for cantilever beam applications, these sensors allow for gaging a single side of the spring element to reduce cost.

The tee rosettes minimize the number of gages needed for testing and provide reduced installation time and potential errors.

Tee rosettes Strain gages are also used to determine the Poisson’s Ratio for a material in accordance with ASTM standards.

They are also used where direct tension measurements, such as a bolt in tension or suspension rod in compression, is desired. A full bridge, produced by using two Tee-rosette strain gages, in this situation minimizes pickup due to bending. Tee rosettes can also be deployed for bending measurements, especially useful on large infrastructure such as wind turbine towers. Adjacent gages on the same backing will see identical temperature and therefore eliminate thermal outputs due to differential temperatures across the structure. Additionally, 45° alignment marks are provided on each T-Rosette gage so it may be accurately applied to a shaft to measure torsion.

A strain gage rosette is, by definition, an arrangement of two or more closely positioned gage grids, separately oriented to measure the normal strains along different directions in the underlying surface of the test part. Rosettes are designed to perform a very practical and important function in experimental stress analysis.

The default construction of a strain gauge transducer uses a full Wheatstone bridge often with multiple backings distributed around the transducer hardware. This offers the best accuracy and insensitivity to off-axis loading, but for lower-cost sensors a single full-bridge pattern can be used. This represents several advantages over two or more backings, the most obvious is the reduced labor to install the strain gauge. The single backing and foil offers better temperature response not just due to the locality of the sensing elements but also because thermal output scatter is virtually eliminated.

Torque measurement is another common application for full-bridge strain gages. In these applications, the strain gage is used to measure engine power output on propshafts and driveshafts, driver input through steering wheels, tightening bolts, or anywhere a component is subjected to a twisting force. The full bridge circuit is used to double the sensitivity to torque and cancel unwanted effects due to axial or bending load components.

In addition, with all four arms of the Wheatstone bridge being manufactured simultaneously from a single piece of foil, grid-to-grid thermal characteristics are more closely matched, and thermal output is cancelled in the bridge circuit. Micro-Measurements full bridge strain gages are available in a variety of sizes, configurations, and mounting technologies.

To measure such small changes in resistance, Advanced Sensors Technology strain gage sensor configurations are based on the idea of a Wheatstone Bridge. The three types of strain gage configurations, quarter-, half-, and full-bridge, are decided by the number of active elements in the Wheatstone bridge, the orientation of the strain gages, and the directions of principal strains.