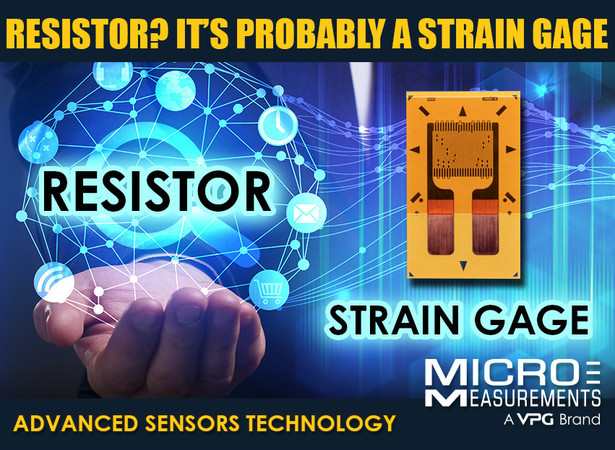 IF IT LOOKS LIKE A RESISTOR, BUT RESPONDS TO STRESS, THEN IT PROBABLY IS A STRAIN GAGE.

The Resistance Rules Of Thumb.

Close-up of a strain gage on thumbnail.

The products we manufacture at Micro-Measurements built with Advanced Sensors Technology are used primarily for experimental stress analysis testing; however, just what is it that our products and technology are used to measure? The answer, in most cases, is a physical quantity called strain.

A farmer may use the word “strain” to mean a certain line of plants or animals: Kentucky Wonder is a popular strain of green beans!” The psychologist would tell you to avoid severe mental or emotional strain. Of course, our products are not used to measure any of these strains; rather, it is engineering (or mechanical) strains with which we are concerned.

Just what is Mechanical Strain?

Strain is a deceptively simple quantity that can be exceptionally difficult to measure accurately. When a body (engineering lingo for a solid object) is stressed (is subjected to a load), the body is deformed (changed in shape). Strain is a measure of the deformation or change in shape of an “engineering” body.

Here is a simple example illustrating the concept of strain. When a rubber band (a solid object) is stretched (subjected to a load), the rubber band becomes longer and thinner (changed in shape). The change in length, ∆L, compared to the original length L, is strain, ε; ( ∆ is the Greek letter delta often used to mean change. ε is the Greek letter epsilon universally used to designate strain.) 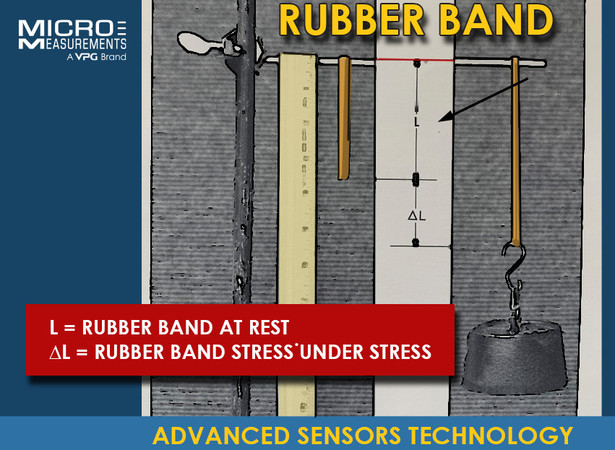 The rubber band shown was subjected to a strain of six tenths of an inch per original inch (∆L) when the weight was applied.

If all strains were as illustrated with the rubber band, there would be no need for Micro-Measurements products and services. A simple ruler would suffice as the measuring tool. In engineering work involving most common structural materials like composite, iron, steel, and concrete, strain measurements as small as one millionth of an inch are commonly required. That is like measuring a change of one inch in the length of a rubber band originally 15.78 miles long! For making engineering measurements of such small strains, electrical resistance strain gages are the most commonly used device.

First, the strain gage is a component used in an electrical circuit. All components in an electrical circuit exhibit some opposition to the flow of electrical current. The unit of measure for electrical resistance is ohm Ω.  A lamp cord, manufactured from large gauge wire, must have very low electrical resistance to provide maximum supply voltage so the light can glow bright when the switch is turned on. Conversely, Micro-Measurements strain gages built with Advanced Sensors Technology have typical resistance values of either 350 ohms, 1000 ohms or 5000 ohms, to provide a much higher opposition to the flow of electrical current to reduce the self-heating effects and to eliminate zero drift and to minimize the influence of the wires in the measurement circuit (lead-wire desensitization).

Strain gages work because their sensing grids (resistive elements) are specially designed, so that when bonded to a test specimen, they change in resistance in direct relationship to the deformation in the specimen due to applied load (stress). 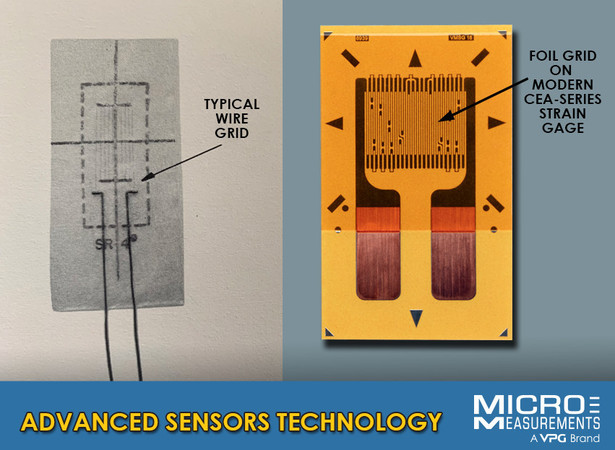 In the early days before Micro-Measurements, strain gages consisted of small diameter metal wires bonded to cigarette paper backing which in turn was intimately bonded to the test specimen. When the strain gage was stretched, the wires-like the rubber band-became longer and thinner  resulting in a proportional electrical resistance change.

Modern-day strain gages, like those produced by Micro-Measurements, have replaced the wire grids and the paper backing with grids etched from thin metal foil on backings of special resin materials. Like the wire gages, the change in resistance of the grids produced by the changes in shape of the grids produces a proportional electrical resistance change.  The relationship of change in length to change in resistance called the gage factor.

Stress cannot be directly measured.  It is simply stated, load or force applied over a given area.  In the case of a simple column, stress is easily calculated as load over the known area; however, most engineering structures are far more complicated than a simple columnar structure hence the need for a strain gage.  Measuring strain and knowing the modulus of elasticity of the structural material, stress may be calculated.  Enter the strain gage as a key engineering tool. Forces like stress (which produces strain) and gravity (which give weight to a body), cannot be measured directly because we cannot see, hear, feel, smell, or taste them. Fortunately, bonded resistance strain gages enable the engineer to measure the effects of forces with a device which by transforming these effects into an electrical signal. This device is called a transducer.

A strain gage installed on the wing of an airplane, to determine the stresses on the wing, becomes a transducer. The measured strain values can then be used by the engineer, in conjunction with his knowledge of engineering mechanics can then calculate the stress. 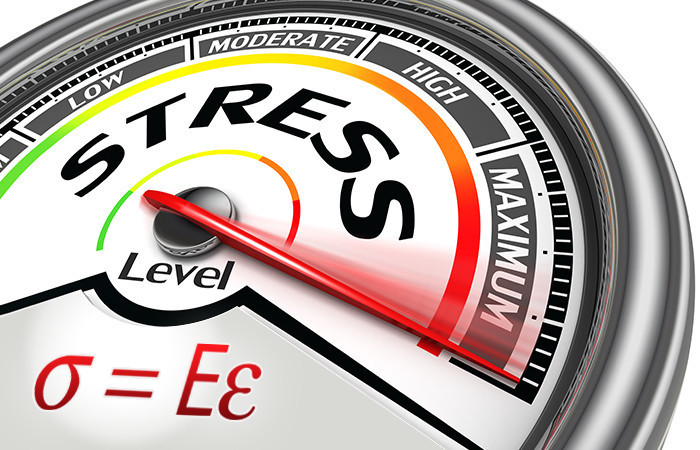 Stress Is Not The Only Condition Which, Can Be Determined by Using Strain Gages in Transducers.

A major use of strain gages today is as primary sensing element in electronic scales. Inside the scale, strain gages are the active sensor on a specially machined transducer spring element. Though a mechanical connection with the weighing platform the spring element deforms when a mass (like a bunch of bananas or a mess of Kentucky Wonder green beans) is placed on the platform. The force of gravity acting on the mass produces stresses, resulting in strain (deformation) in the transducer spring element. The resulting strain in turn results in a change in electrical resistance in the strain gages which are bonded to the spring element. The resulting voltage change in the Wheatstone bridge circuit then can be amplified and converted from an analog signal to a digital value which can then displayed or recorded as needed in the appropriate engineering values such as pounds.

Through the use of Micro-Measurements Advanced Sensor Technology strain gages, accurate strain measurements provide customers with the tools to accurately measure strain so they can design safer, lighter and more economical products through experimental stress analysis and make accurate measurement of weight, force, torque, displacement and pressure for critical process control and legal for trade applications.

At Micro-Measurements, Your customer’s success is our goal! 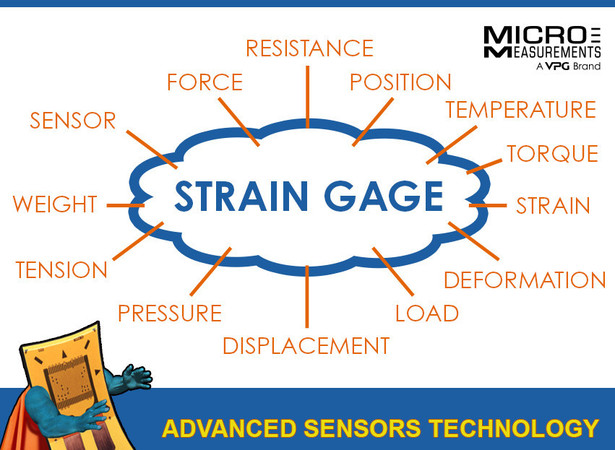