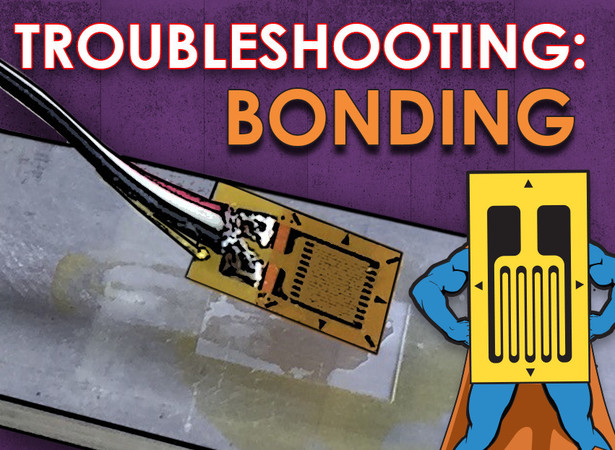 Strain gage installers (= stress analysts) sometimes have trouble getting the strain gage sensors to bond to the test structure, when using the cellophane tape method of gage handling, for example, the strain gage may come up with the tape. Or the gage may initially adhere to the surface, but then come loose during subsequent lead-wire attachment or upon loading the test structure. In any case, the problem is ordinarily not a difficult one to solve. 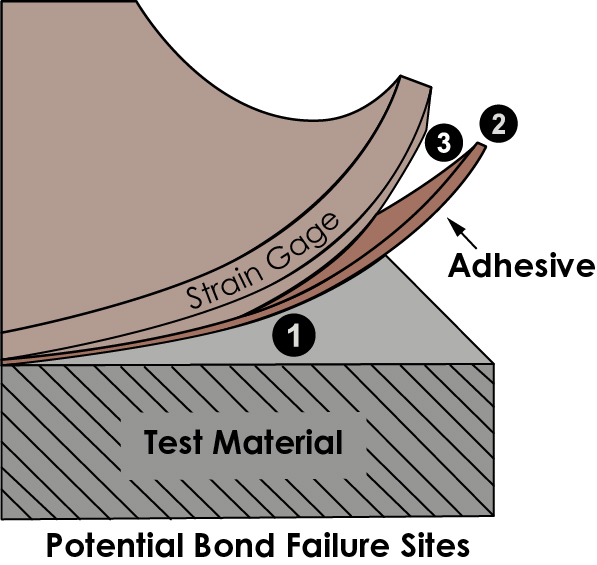 As indicated in the accompanying diagram, there are three primary origins for a bond failure. The most commonly encountered of these is at the interface between the adhesive and the surface of the test part. The second is within the adhesive itself; i.e., the adhesive may have insufficient cohesive strength to perform its function. The last, and least frequent, source of bond failure is at the juncture of the adhesive and the gage backing. With very poor gage installation practice, all three modes of failure could be present in varying degrees, but normally a single factor usually dominates. Therefore, it is often possible to determine the mechanism of a bond failure by carefully examining the backing of the gage and the test surface immediately following the disbonding event.

If the bond failed due to poor adhesion between the cement and the test material, the surface of the material in the gaged area will be largely free of adhesive, except for the residue around the edge of the gage location. On the other hand, if the adhesive adhered to the test surface but not to the gage backing, then the third failure mode is indicated. When there is cement on both the gage backing and the gaged area of the test surface, it can be assumed that the cement has low cohesive strength. In this case, it may be found that the cement is still tacky, and only partially cured.

Even if the evidence from foregoing inspection is not decisive, it is generally advantageous to consider first the surface condition of the test specimen. Surface preparation may have been inadequate to remove all traces of bond-inhibiting contaminates – especially if shortcut procedures or makeshift supplies were used. Improper surface preparation methods and materials can actually introduce contaminations to a surface. It is also possible that the surface was recontaminated after being thoroughly cleaned. This is apt to occur when too much time elapses between preparation of the surface and installation of the gage. Under such conditions, the surface can be contaminated with dust, oil vapors, chemicals, oxidation, etc. Another possibility is that oils (including silicones) trapped in the pores of the material may have risen to the surface to interact with the adhesive. The silicones, incidentally, are extremely detrimental to adhesive bonds; and, silicone contamination of either the workpiece or the gage backing is an increasingly common source of gage bonding problems.Experienced professionals make certain that silicone compounds are kept entirely out of the strain gage bonding area.

Proper surface preparation is always important in successful strain gage bonding. When bond problems occur, they can ordinarily be overcome by following the detailed directions given in Micro-Measurements Instruction Bulletin B-129, Surface Preparation for Strain Gage Bonding.

When the bond failure is identified as due to low cohesive strength of the cement, the installer needs to determine whether the fault lies with the adhesive or the curing procedure. M-Bond adhesives are pretested for performance, lot-by-lot, and the labeled with appropriate expiration dates. If the adhesive is applied and cured according to the instructions and used prior to its expiration date, it should consistently develop proper strength for accurate strain measurements. Experience has shown that bond failures assignable to low cohesive strength in the cement usually arise from causes such as the following:

Bond failures at the surface between the adhesive and the gage backing are rare. In the original packaging, backings of Micro-Measurements strain gage sensors are chemically clean, and have been treated for enhanced bonding characteristics. Failure of the cement to adhere strongly to the backing indicates contamination of the backing – due either to handling with fingers ( or contaminated tools), or to poor storage conditions.

Strain gage bond failures are, in general, unnecessary. Most can be avoided by simply using only qualified supplies, and rigorously following the adhesive application and curing instructions. If these efforts fail, the gage installer should consult with the Micro-Measurements application engineering staff for assistance in resolving the difficulty.