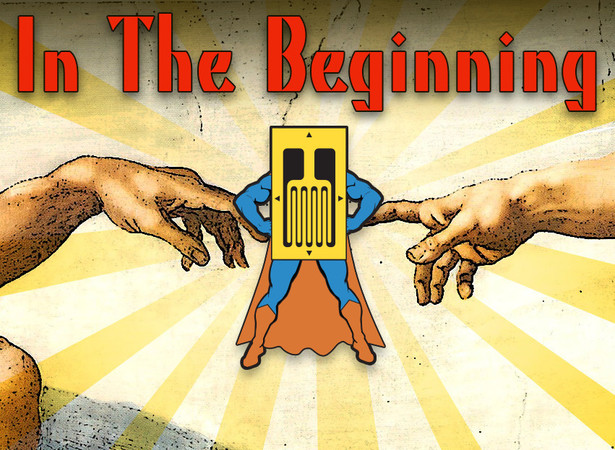 How did it start? What science spawned the bonded electrical resistance strain gage?

Mechanics and electricity, two main branches of science and technology, came together to form the need for and the foundation for the invention of the strain gage and its European twin brother strain gauge.

Before there were rolled foil strain gages and before there were Ed Simmons and Arthur Ruge, there was Sir Isaac Newton and William Thomson (a.k.a. Lord Kelvin). From an apple falling on his head and the creation of the calculus, Newton invented that branch of physics known as mechanics, which pertains to motion and forces. Almost two centuries later, Lord Kelvin discovered the relationship between electrical conductor length and resistance. Putting the two together, we have the recipe for inventing the bonded electrical resistance strain gage by Simmons and Ruge, almost another century later.

Of course, many now-famous scientists and engineers had their hands – and minds – in the development of Applied Mechanics/Strength of Materials, that branch of science specific to the strain gage. Names like, Navier, Hooke, Saint-Vernant, Lame, Cauchy, Airy, Laplace, and the list goes on for several centuries of brilliant mathematicians and technicians who drove the development and understanding of how solid materials respond to applied forces.

But a funny thing happened along the way from Newton’s laws of motion to Tresca’s metal failure theory. As the equations became more refined, revealing deeper understanding of material behavior, the need arose for sensors capable of providing higher resolution to verify those equations. This became painfully evident a few years before the Second World War, as fighter planes were dropping from the sky because of broken propellers.

To help understand these failures, recent Penn State grad, Charles Kearns, then working at Hamilton Standard, decided to grind down the carbon element from a carbon resistor and glue the ‘dust’ he created to a metal beam that could be strained. Brilliantly, the simple sensor responded to strain, more or less linearly. The year was 1936.

Unfortunately, the carbon dust strain gage also responded very nicely to temperature, rendering Kearns’ invention primarily useful in dynamic applications. But airplane propeller failures are dynamic, and within four years failures had been reduced from a few dozen per year, to zero.

At the time of Kearns’ invention, Ed Simmons was an electrical engineering graduate student at Cal Tech. The impact lab at Cal Tech needed a stable strain sensor for a high-speed impact dynamometer, and they asked for his input. Without fanfare, Simmons instructed them to substitute a fine wire from a stable wire-wound resistor in place of the unstable carbon-based sensors being used. They glued the wire in a serpentine shape to a thin paper carrier and bonded it – wire side down – to the impact beam. The stable bonded resistance strain gage was born.