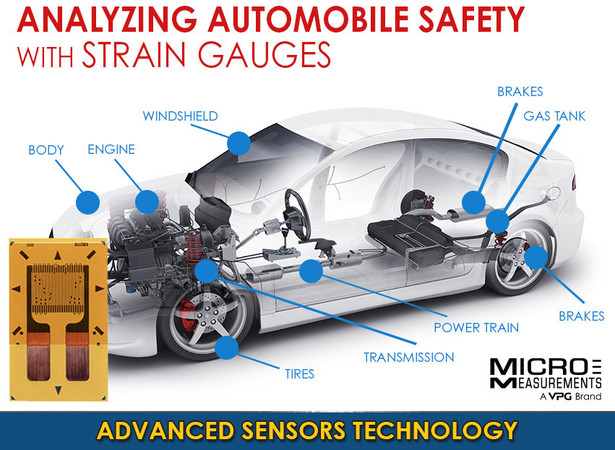 When the first bonded resistance strain gauges were introduced to industrial stress analysts and designers in the late 1930s and early 1940s, the automotive industry was among the first avid users of the new technology of experimental stress analysis. This fledgling technology was based on wire strain gages; the precision foil electrical resistance strain gage had not yet been developed and would not be invented for another 15-20 years.

Strain gauges were paper-backed and constructed with fine wire which is very crude by comparison to today’s Micro-Measurements’ Advanced Sensors Technology standards and designs. Photoelastic coatings were not yet a practical engineering tool, and the photoelastic models that were in existence were primarily restricted to the university laboratory as a scientific curiosity.

Even at this early stage in stress analysis technology, the major auto makers recognized – and used – those available techniques to strengthen, lighten, and economize new vehicle designs.

Over the years, the techniques of experimental stress analysis were routinely incorporated into the design and development phase of any new automotive breakthrough or refinement.

The first lightweight aluminum block engine was tested with PhotoStress coating and strain gages in a major development program in 1958.

Recently, the incorporation of a new, lightweight composites such as Fiber-reinforced plastic (FRP) into modern conventional and electrical car and truck components resulted from extensive strain gage tests of the suitability of these materials for vehicle application. This new trend encouraged the development of several new strain gage patterns that can be embedded into structural components during manufacturing in order to enable strain to be measured at stress concentration areas that typically were not accessible with classical surface installations.

Modern Advanced Sensors strain gages have even greater advantages when used  to measure stress in automotive parts under dynamic flow conditions, such as in wind tunnels. Embedding the foil strain gages into tested structure can reduce unintended “electrical” noise in the measurement that can result with sensors that are installed on the surface. The use of 350-ohm, 1K-ohm and even 5K-ohm foil strain gages can result in more stable and reliable readings, these gages have been shown to significantly reduce current flow and the resulting self-heating that can result from using low-resistance strain gages.

Designed for general purpose, static and dynamic stress analysis, the new CEA and EA strain gage sensors built with Advanced Sensors Technology are ideally suited for a broad range of applications in automotive applications (see below). 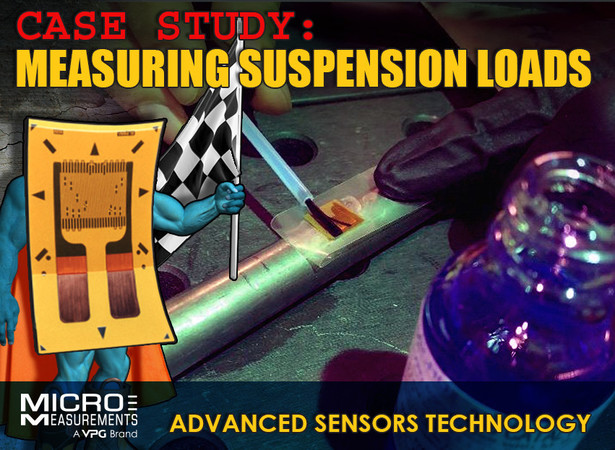 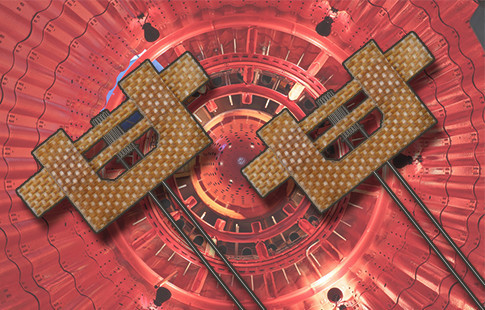 So, why is all of this essential? Today’s cars and the autonomous and semi-autonomous cars of the future will have even more technology than ever before, but drivers’ high expectations for vehicle durability, efficiency, and safety will remain unchanged. Not meeting these expectations in all phases of vehicle design can represent a huge risk to car makers in terms of productivity, warranty risk, and liability.

Today, in the Automotive industry, foil strain gauges are the fundamental sensing elements for many types of devices, including torque sensors, pressure sensors, load cells, and last but not least  position sensors. A foil strain gage is an active resistive device which is typically incorporated into a Wheatstone bridge circuit that when an excitation voltage is applied, such that the output voltage is proportional to an applied force, pressure, weight, compressive or tensional load. When the force changes, the electrical resistance of the strain gage increased or decreased which produces an electrical signal allowing direct measurement of a signal that is proportional to a force.

With the recent, much publicized challenges of design economy, material saving, and reliability confronting the automotive industry, it is not surprising that Micro-Measurements strain gages, accessories and DAQ are finding a major role in the “new direction” or the “new normal” that automotive manufacturers are taking in order to increase the fuel efficiency, longevity, reliability and occupant safety on a wide range of on and off-road conditions. 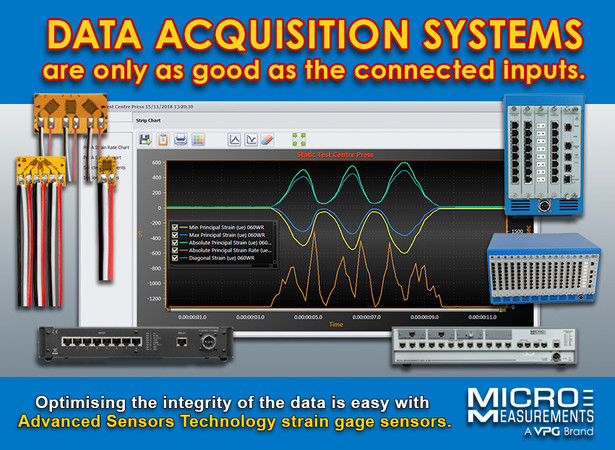 We believe that the new era of stress analysis will play an increasingly important role in the worldwide automobile industry’s recovery and prosperity in the future.